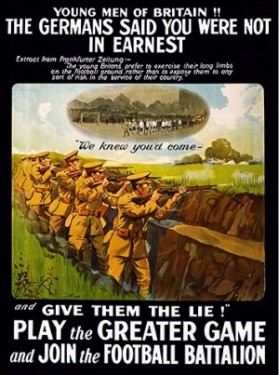 Following the outbreak of World War One, a heated debate took place in the letter pages of many national newspapers about the continuance of professional football during a time of national crisis. Several prominent personalities of the day, such as W.G. Grace and Field Marshal Roberts saw fit to pass comment. The issue was also raised in the House of Commons. Such was the strength of feeling that it was even suggested to King George V that he should withdraw his patronage of the Football Association.

By the end of November 1914 the reputation of the professional game had suffered untold damage and it was becoming increasingly apparent that some account had to be taken of public opinion. As a result of discussions between the Football Association and the War Office, a decision was taken to set up a Footballers’ Battalion. It was hoped that such a unit would encourage young men to enlist and prove to the country at large that professional footballers were prepared ‘do their bit’. The man tasked with raising a Footballers’ Battalion, the Rt. Hon. William Joynson Hicks MP, had no association with the game, but he lost little time in setting about the task.

The 17th Middlesex was raised at a meeting in Fulham Town Hall on 15 December 1914, more than four months since the start of the Great War. After a series of rousing speeches, including one by Lord Kinnaird, President of the Football Association and holder of five FA Cup winners’ medals, the first players began stepping up onto the platform. By the end of the meeting, the 17th Middlesex had its first recruits:

Recruitment for the was completed in spring 1915. Around two hundred professional players with connections to over sixty current Premiership and Football League clubs had enlisted. Alongside them in the 17th Middlesex were amateur players, club staff, officials and football fans eager to serve alongside players, such as Vivian Woodward (Chelsea), ‘Tim’ Coleman (Nottingham Forest) and Walter Tull (Northampton Town). While undergoing training in the UK, members of the continued to turn out for their respective clubs until the end of the 1914/15 season when professional football was effectively suspended for the duration of the war. Battalion teams also played many matches against League and non-League clubs in order to attract recruits and to raise funds for a band.

The match ended in an 11-0 victory for the 17th Middlesex. In time, a commemorative medal would be struck for each member of the team. The medals were made of silver, and were described as being of ‘handsome design’. In addition to the name of the player, each medal bore the following inscription: ‘B.E.F. France, Association Football Cup’. By the time these medals were ready for distribution in the autumn, Sid Wheelhouse, George Scott, Billy Baker and William Jonas were no longer alive to receive them.

A few weeks after the Divisional Cup Final, the 17th Middlesex moved south to Vimy Ridge, where the undertook its first offensive action near Souchez. In July 1916, the 17th Middlesex entrained for the Somme, where the was involved in heavy fighting at Delville Wood (27–29 July) and Guillemont (8 August). These actions exacted such a toll on the 17th Middlesex that a draft of 716 men was needed to bring it back up to strength. Several footballers, including William Jonas (Clapton Orient), Norman Wood (Stockport County) and Allen Foster (Reading), had lost their lives, while many others, such as Frank Buckley (Bradford City), Fred Keenor (Cardiff City) and Ted Hanney (Manchester City) were among the wounded.

On 13 November 1916, the 17th Middlesex attacked the Redan Ridge, near Serre in the Battle of the Ancre. After weeks of heavy rain, some men sank up to their waists in the mud and a heavy fog hung over the battlefield, limiting visibility to thirty yards. In an act of remarkable sangfroid, two companies (B and D) of the 17th Middlesex went over the top playing mouth organs. The war diary recorded the losses of the day’s fighting, as three officers killed, two wounded and eight missing; fifteen other ranks killed, 145 wounded and 133 missing.

During the Arras offensive the following year, the 17th Middlesex suffered its heaviest casualties in a single day’s fighting during the entire war. Having fought its way through Oppy Wood into the small village of Oppy on 28 April 1917, the was cut off and surrounded. After a desperate fight, the survivors, many of them wounded, were captured. Among those taken prisoner were Joe Mercer (Nottingham Forest), Charles Abbs (Norwich City) and Wilf Nixon (Fulham). The casualties of the 17th Middlesex on 28 April 1917 were eleven officers and 451 ranks killed, wounded and missing.

After a period of reconstitution the 17th Middlesex then faced the full onslaught of the German counter-attacks at Cambrai (30 November- 1st December). Under severe pressure, in trenches south of the village of Moeuvres, the fought hard to hold up the German advance. One of its officers, Captain Allastair McReady-Diarmid, was awarded a posthumous Victoria Cross for leading a small bombing party to recover trenches that had been captured by the Germans. ‘By throwing all the bombs himself,’ said the Official Report, ‘this officer killed and otherwise disposed of 94 of the enemy – 67 dead and 27 wounded were actually counted after the recapture of the trench, a feat which can hardly have been equalled in the past. Every foot of the 300 yards of lost trench was regained, and by his deliberate disregard of danger, his cheerfulness and coolness, Captain McReady-Diarmid inspired all who saw him’.

Despite its proud record, the 17th Middlesex was disbanded in February 1918 in the wake of manpower shortages in the British army. The remaining officers and men were transferred to other units. It was estimated that at the time of the ’s disbandment there were only thirty or so professional footballers still serving in its ranks.

There were eventually two football s formed as part of the Middlesex Regiment during World War One. The 23rd Middlesex was raised by the Rt. Hon Joynson Hicks in May 1915. After completing its training in the UK, the 23rd Middlesex arrived on the Western Front in May 1916 and went into the line near Le Touquet. In August the entrained for the Somme where they took part in the Battle of Flers-Courcelette on 15 September (the first occasion on which tanks were used in battle). In heavy fighting around Flers Wood the lost nearly half its strength, including Lt Col William Ash, its commanding officer.

On 7 June 1917 the 23rd Middlesex was involved in the attack on the Messines ridge, a few miles south of Ypres. Four days later, when the left the front line, only eight officers and 298 other ranks had not become casualties. Over the next few months, the fought in the Battles of Pilckem Ridge and the Menin Road during the Passchendaele offensive.

In November 1917 the 23rd Middlesex were sent to help shore up the collapsing Italian front, in the wake of the German victory at Caparetto. The returned to the Western Front in March 1918 in time to play its part in helping stem a series of German offensives. As the tide of war turned in the summer of 1918, the 23rd Middlesex took part in the Advance to Victory and at the time of the Armistice on 11 November 1918 the was near Nederbrakel in Belgium.

The legacy of the Footballers’ Battalions

The Footballers’ Battalions were at the forefront of the game’s contribution to the war effort during World War One. Both s assisted with recruitment and fought in some of the bloodiest engagements of the Great War. There were also the countless football matches on active service, in which teams played against other units of the British army in France. In November 1917 Private Jack Dodds, the Oldham Athletic outside-left, wrote home:

After a few weeks of trench work we arrive at some village for a few days and of course our first thought after a day or so of rest is to fix a game up. Very often a suitable ground is hard to find and to give you an idea the worst grounds at home are very often a croquet lawn to where we play. However our keenness gets over this, and then we play for four or five days running. In fact every man has had enough when our return to the trenches is necessary. Sometimes we have teams waiting for us coming out of the line to try and lower our colours. So far none have managed, although we must have played over 50 games in this country. We have only once been extended, and that by the Argyll and Sutherland Highlanders whom we beat 1-0. This team included several Scottish players most prominent amongst them being Tom Logan of Chelsea. We have played numerous s, ASC and RAMC units and also the pick of different brigades and even divisions. All have been easily beaten …

On 21 October 2010 Greg Clarke, chairman of the Football League, unveiled a memorial to the officers and men of the Footballers’ Battalions in the village of Longueval, just outside Delville Wood. The memorial features the words of Colonel Henry Fenwick, the commanding officer of the 17th Middlesex when the arrived on the Western Front in November 1915:

I knew nothing of professional footballers when I took over this . But I have learnt to value them. I would go anywhere with such men. Their esprit de corps was amazing. This feeling was mainly due to football – the link of fellowship which bound them together. Football has a wonderful grip on these men and on the Army generally.

By Andrew Riddoch
Author of When the Whistle Blows: The Story of the Footballers’ Battalion in the Great War

© Copyright Andrew Riddoch. All rights Reserved. Not to be reproduced.