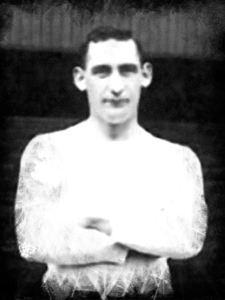 Alfred Hobday (1887-1915) was born in Blackhill, County Durham on 12 December 1887 and died in Belgium on 16 June 1915. A pre-war regular soldier, Hobday was an army reservist when he joined Tottenham Hotspur in 1913 and was called into service soon after the outbreak of the First World War. Having subsequently gone overseas with the British Expedition Force (BEF), Hobday was killed in the Ypres Salient in 1915.

Private 377 Hobday joined the 1st Northumberland Fusiliers as a regular soldier in February 1904 and was posted to Phoenix Camp in Vacoas, Mauritius. After spending time at in Calcutta and Peshawar,  Hobday was posted to Matta Moghul Khel in 1908 where he took part in the Mohmand Expedition along the North West Frontier.

A further posting took Hobday to Rawalpindi before he finally left the army and returned to Britain in 1912. During his time in India, Hobday had proved himself an adept sportsman and had played regimental football and inter-company cricket and athletics.

On returning to Britain, Hobday worked for the North Eastern Railway and also played for local amateur sides West Stanley, Allandale Park and Consett Swifts. In May 1913, he was offered professional terms by Tottenham Hotspur after impressing as a trialist during a reserve team match against Tunbridge Wells. Hobday subsequently signed for the London club and soon established himself in their second string. Despite becoming a regular fixture in the reserves, Hobday would struggle to break into the first team at White Hart Lane and had made just one senior appearance,  a London Challenge Cup semi-final clash against Arsenal, by the time he returned to the north-east in the months leading up to the First World War.

Hobday was recalled from the Army Reserves at the outbreak of war and was promoted to the rank of sergeant soon after arriving in France with 1st Northumberland Fusiliers on 14 August 1914. The battalion subsequently saw action at Mons,  Le Cateau, The Marne, The Aisne, La Bassee, Messines and First Ypres, during which time it is reported Hobday was recommended for the Victoria Cross* after bringing in a wounded officer under heavy fire.

On 16 June 1915, the battalion took part in the First Battle of Bellewaarde when they launched an assault on enemy positions at 0415. After some initial success the fusiliers soon suffered significant casualties during heavy enemy artillery fire and hand-to-hand fighting. Among those later reported missing was Sergeant Hobday who was believed to have been wounded in the area of Railway Wood. His body was never found and his name is now among more than 54,000 listed on the Ypres (Menin Gate) Memorial in Ypres.

*Hobday was also reported to have been awarded the Legion d’Honneur and recommended for the Victoria Cross in contemporary newspaper reports, however, there is no substantiating evidence to confirm the claim.