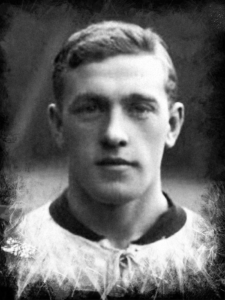 Andrew Jackson (1891-1918) was born in Cambuslang, Lanarkshire in 1891 and died in Belgium on 30 September 1918. An experienced centre-half, Jackson spent five season at Middlesbrough before joining the British Army during World War One. After subsequently rising to the rank of sergeant, Jackson would die of wounds on the Western Front just weeks before the armistice.

Jackson began his career at Scottish amateur side Ardrossan Rovers before moving to Middlesbrough in late 1909. After making his debut on 3 September 1910, Jackson would go on to play 137 games in five seasons and would also captain the side. During the 1914/15 campaign, Jackson played 30 games for Boro as they secured a 12th placed finish in the English top flight. At the end of his final season at the club, the defender returned north of the border where he would enlist in the British Army.

Private 220364 Jackson joined the 5th (Service) Battalion of the Queen’s Own Cameron Highlanders on his return to Scotland (SDGW records Jackson as previously 3717 Lovat Scouts) and was subsequently posted overseas on active service. Seemingly suited to military life, Jackson was soon promoted and would eventually rise to the rank of sergeant.

In 1918, the 5th Camerons saw action on the Somme and were also involved in the Battles of the Lys. In the closing weeks of the war, the battalion took part in the final advance in Flanders before being withdrawn from the frontline for the final time in late October 1918. It was during this final action that Jackson sustained the wounds that would eventually lead to his death at 36th Casualty Clearing Station on 30 September 1918. He was subsequently buried at Haringh(Bandaghem) Military Cemetery, located 18km west of Ypres.