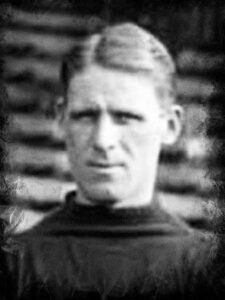 Arthur Richard Kempton (1889-1958) was born in West Thurrock, Essex on 29 January 1889 and died in Reading, Berkshire in December 1958. A goalkeeper by trade, Kempton had a limited career in English football either side of the First World War, during which he served in the Royal Flying Corps/Royal Air Force.

Kempton started out at Sussex County League club Hastings & St. Leonards before joining leading North London amateur side, Tufnell Park, in 1913. In October 1914, Kempton moved to Second Division Arsenal and signed professional terms one month later. The goalkeeper would then make his debut in a 3-0 FA Cup First Round win over Merthyr Tydfil on 9 January 1915, but subsequently found further opportunities difficult to come by.

During the First World War, Kempton enlisted in the Royal Flying Corps (RFC) but would also play 30 further games for Arsenal as a wartime guest. He then returned to Highbury following the Armistice, but would spend the next two seasons as third-choice goalkeeper.

Kempton was finally released by Arsenal in June 1921, when he signed for Reading on a free transfer. His career at the Berkshire club was to be short-lived and Kempton left Elm Park 1922 having made just 10 appearances. Brief spells at non-league sides Folkestone and Tunbridge Well Rangers followed, before Kempton retired from the game..

Air Mechanic 2nd Class 40710 Kempton enlisted in the Royal Flying Corps (RFC) on 27 July 1916 and subsequently trained as a rigger. On 1 January 1918, Kempton was appointed air mechanic 1st class, the rank he held when the RFC merged with the Royal Naval Air Service (RNAS) to form the RAF on 1 April 1918. Kempton was subsequently promoted to acting-corporal on 1 July 1918, before being appointed corporal on 1 September 1918. Transferred to the RAF Reserve on 5 March 1919, Kempton was finally discharged on 30 April 1920.