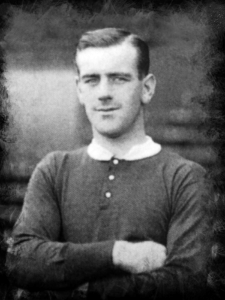 Arthur Whalley (1886-1952) was born in Rainford, Lancashire on 17 February 1886 and died on 23 November 1952 in Wythenshawe, Manchester. A commanding half-back, Whalley played more than 250 games in a career that spanned two decades and featured six clubs. In 1915, Whalley was handed a life-time ban for his involvement in the Good Friday match-fixing scandal, which was later lifted following service in the First World War.

Whalley began his career at Lancashire side Brynn Central before moving to Blackpool, where he made his debut on Christmas Day 1908 in a 1-1 draw at Burnley. After just five further games for the seasiders, Whalley joined Manchester United for a fee of £50 and made his debut in a 4-1 defeat at the Wednesday on 27 December 1909.

Despite initially being used as cover for first-choice half-backs Charlie Roberts, Alec Bell and Dick Duckworth, Whalley soon began to establish himself as a key component of Ernest Mangnall’s squad and was part of the side that won the First Division title in 1910/11. He had played almost 70 games for United by the time he was struck by serious knee injury during the 1913/14 season and would make just one appearance during the 1914/15 campaign, a 4-2 defeat to Everton at Goodison Park.

Despite his lack of playing time, Whalley was implicated in the notorious match-fixing scandal involving the game between United and Liverpool at Old Trafford on Friday 2 April 1915. Suspicions that the match, which the home side won 2-0, had been fixed were soon proved and Whalley was one of eight players handed life-time bans by the Football Association. He would then enlist in the British Army and eventually saw his ban lifted  following service in the First World War.

Whalley returned to Manchester United in 1919 to play one further season at the club, before moving to Southend United in August 192o. After just one season at Kursaal, he joined Charlton Athletic and made his debut on 9 October 1921 in a 2-0 defeat at Queens’ Park Rangers. Whalley would go on to play almost one hundred games for Charlton before moving again in 1924, this time to Millwall. He then moved to Cumbrian side Barrow in December 19126, where would finally finish his career. After retiring from the game, Whalley worked as a bookmaker in Manchester until his death on 23 November 1952.

Private F/1930 Whalley joined the 23rd (Service) Battalion of the Middlesex Regiment, better known as the 2nd Footballers’ Battalion, in September 1915 and landed in France in May 1916 as part of 41st Division. The battalion saw action at the Battle of Flers-Courcelette and the Battle of Transloy Ridges during the 1916 Somme offensive before taking part in the British offensive around Ypres in 1917. It was during the latter action that Whalley, who had by that time risen to the rank of sergeant, was seriously wounded in the head and leg and sent to hospital in Orpington, Kent. He subsequently recovered from his injuries and was able to return to football following the Armistice in 1918.