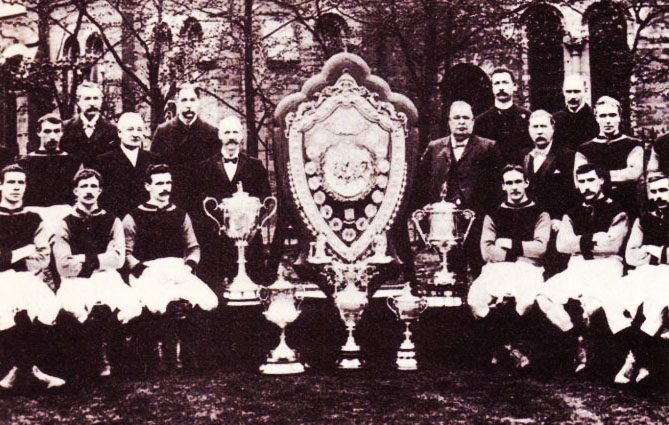 Aston Villa Football Club were formed in 1874 by members of the Villa Cross Wesleyan Chapel, Handsworth, who are said to have "met under a gas light on Heathfield Road" to finalise their plans to launch the new team.

Accounts vary, however it is generally believed Villa played their first game in the autumn of 1874 against Aston Brook St. Mary's Rugby Club, who only agreed to the encounter after it was agreed to play the first half under Rugby Football rules and the second under the laws of Association Football.

In late 1874 the club moved to its first permanent home on Wellington Road, Perry Barr and soon began to establish themselves as one of the leading clubs in the West Midlands. The first piece of silverware was won with a Birmingham Senior Cup triumph in 1880, and Villa went on to lift their first FA Cup in 1887 after beating local rivals West Bromwich Albion 2-0 at the London Oval.

The club were to play a significant role in the creation of the Football League one year later, being one of the 12 founding members of a competition that had been the brainchild of their Scottish director, William McGregor. On 8 September 1888, Villa played their very first game in the new league, a 1-1 draw with Wolverhampton Wanderers, before going on to finish second behind eventual champions Preston North End. 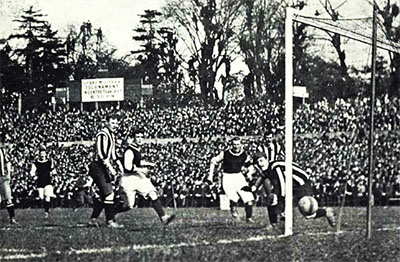 Under the astute guidance of former team captain George Ramsey, the club continued to build on this impressive early form and by 1894, they had won their first title after finishing six points ahead of second-placed Sunderland. More success was to follow and Villa won the 1895 FA Cup before strolling to consecutive title during the 1895/96 and 1896/97 seasons.

With success came increased support and the club soon realised that a move was necessary to maximise gate revenue. In 1897, Villa moved to a new home at Aston Lower Grounds, located at Aston Hall and had won three more titles, including a league and cup double in 1896/97, by the turn of the 20th century.

Villa had been the dominant force in English football for much of the past decade, however they could not sustain that overwhelming success and had slumped to the lower reaches of the division by the end of the 1900/01 season.

This poor form proved temporary however, and Villa finished second, just one point behind champions The Wednesday, during the 1901/02 campaign. They then clinched their fourth FA Cup in 1905 after Harry Hampton scored the only goal of the final against Newcastle United.

In 1909/10 Villa won what would prove to be their last league championship for more than 70 years, securing the club a record sixth title. Three years later, they won their final trophy of the pre-war period after beating Sunderland 1-0 in the 1913 FA Cup Final.

Villa would finish in a disappointing 13th place during the 1914/15 Football League First Division campaign and were also knocked out of the FA Cup in the second round, following a 1-0 loss to Manchester City at Hyde Road.