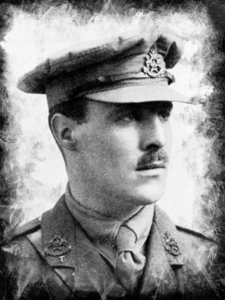 Bernard William Vann VC MC & Bar (1887-1918) was born on 9 July 1887 in Rushden, Northamptonshire and died in France on 3 October 1918. An ordained Church of England clergyman and amateur footballer, Vann would win the Victoria Cross, Military Cross and Bar, and Croix de Guerre during the First World War before losing his life just five weeks before the Armistice in 1918.

Vann began his football career playing at local amateur sides Hugglescote United and Irthlingborough before accepting a teaching job at Ashby-de-la-Zouche Grammar School in Leicestershire. Soon after, Vann got his first taste of senior football when he turned out for Southern League outfit Northampton Town, who also featured his brother, Arthur, amongst their ranks.

During the 1906/07 season, the brothers were both invited to play as amateurs for Burton United and Vann would make his Football League debut in a 1-1 home draw with Barnsley on 16 February 1907. After playing four further games for the club, during which he also scored his only senior goal, Vann agreed to join Derby County and was subsequently handed his debut on 23 March.

Vann’s Derby career would prove short-lived, however, and he would make just two more appearances for the Rams without scoring. A short spell at Leicester Fosse followed before Vann moved to Cambridge to study at Jesus College in the autumn of 1907. He would then turn out briefly for Mansfield Wesleyans.

During his time in Cambridge, Vann would establish himself as a talented all-round sportsman and was awarded his hockey ‘blue’ before leaving the college in 1910. Vann was then ordained in September 1910 but continued to play football and suffered concussion during a game in Oundle two years later.  In the years leading up to the First World War, Vann was a chaplain at Wellingborough School, Northamptonshire where he also taught History and Theology, and coached both the football and cricket teams.

Vann initially volunteered to serve as a chaplain in the British Army before subsequently enlisting as a private (1800) in 28th (County of London) Battalion (The Artists’ Rifles), The London Regiment. He was then commissioned as a second lieutenant in the 1/8th Sherwood Foresters on 1 September 1914 and would finally arrive in France in February 1915.

After taking part in heavy fighting at Kemmel, during which he organised a defence and rescued a number of wounded men, 2nd Lt Vann was promoted to the rank of lieutenant on 26 April 1915 and was made a temporary captain in June. Soon after he was awarded the Military Cross. The London Gazette published the following citation on 15 September 1915:

At Kemmel on 24 April 1915 when a small advance trench which he occupied was blown in, and he himself wounded and half buried, he showed the greatest determination in organising the defence and rescuing buried men under heavy fire, although wounded and severely bruised he refused to leave his post until directly ordered to do so. At Ypres on 31 July 1915, and subsequent days, he ably assisted another officer to hold the left trench of the line, setting a fine example to those around him. On various occasions he has led patrols up to the enemy’s trenches and obtained valuable information.

Vann would then take part in the Battle of Loos, during which his brother Arthur would lose his life, and was wounded in the left arm during fighting at the Hollenzollern Redoubt on 15 October 1915. He would subsequently make a full recovery and was promoted to the rank of captain on 1 June 1916. In September, Vann won a bar to his MC and was then awarded the French Croix de Guerre five months later. In September 1917, Vann assumed command of the 1/6th Sherwood Foresters and was appointed acting lieutenant colonel the following month.

By 29 September 1918, Vann was with his near the St Quentin Canal when he led an attack under fire against an enemy machine gun position and then single-handedly rushed a German field gun. Vann was subsequently killed by an enemey sniper on 3 October 1918 near Ramicourt. For his actions four days earlier, Vann was awarded the Victoria Cross. The London Gazette published the following citation on 14 December 1918:

For most conspicuous bravery, devotion to Duty and fine leadership during the attack at Bellenglise and Lehaucourt on 29 September 1918. He lead his with great skill across the Canal du Nord through a very thick fog and heavy fire from field and machine guns. On reaching the high ground above Bellenglise, the whole attack was held up by fire of all descriptions from the front and right flank. Realising that everything depended on the advance going forward with the barrage, Lt. Col. Vann rushed up to the firing line, and with the greatest gallantry led the line forward. By his prompt action and contempt for danger the whole situation was changed, the men were encouraged and the line swept forward. Later he rushed a field gun single handed, and knocked out three of the detachment. The success of the day was in no small degree due to the splendid gallantry and fine leadership displayed by this officer.

Lieutenant Colonel The Reverend Bernard William Vann VC MC & Bar was buried at Bellicourt British Cemetery and left a widow, Doris Vann, a young Canadian nurse who he had married during a period of home leave in December 1916.