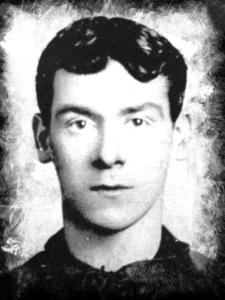 William Bottomley (1886-1958) was born in Mossley, Tameside on 4 June 1886 and died in Yorkshire on 8 May 1958. An accomplished wing-half, Bottomley played more than one hundred league and cup games in English football before the First World War, during which he served as a soldier in the British Army.

Bill Bottomley began his professional footballing career at Second Division Oldham Athletic, making his senior debut in a 1-0 home victory over Barnsley on 26 October 1907. He went on to make 12 further appearances during the 1907/08 season, helping Oldham to a third-place finish behind champions Bradford City and runners-up Leicester Fosse.

In May 1908 Bottomley made the short move to Hyde Road to join Manchester City, who had just finished third in the English top flight under manager Harry Newbould. The young wing-half was to play just one match during his debut season at his new club however, as City lost five of their final six games of a terrible season to drop down into the Second Division for the first time in seven years.

Despite the disappointment of relegation, City were to spend just one season in the second tier as Bottomley made 14 appearances to help his side to promotion as league champions. Bottomley would go on to play 83 more times for City over the next four seasons, including 33 games during the 1912/13 campaign – the most productive of his career.

Bottomley played his final official match for Manchester City in a 0-0 home draw with former side Oldham Athletic on 1 January 1915, however, he also made 32 unofficial appearances for the club during the First World War.

Private M/322372 Bottomley enlisted in the Army Service Corps (ASC) in December 1915 and was posted to the ASC Mechanical Transport (MT) Depot at Grove Park, London. Bottomley’s subsequent service is unknown, however, he survived the war and returned to his home on Horsforth Road in Saddleworth following the armistice. Bottomley died in 1958 aged 71.

Additional information provided by Raymond Court.
A full list of sources used to create this page can be found here.