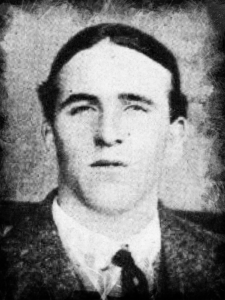 William Armstrong Henry (1884-c1960) was born on 6 September 1884 in Glasgow, Lanarkshire and died circa 1960. An accomplished full-back, Henry played more than 250 games in a career that took him to five different clubs in both Scotland and England. Henry returned to Glasgow during the First World War to enlist in the British Army.

Henry began his footballing career at local side Blantyre Victoria in South Lanarkshire, before joining Scottish First Division side Glasgow Rangers as a teenager. He made his senior debut during the 1906/07 campaign, going on to play 31 times in two seasons at the Ibrox club. A brief spell at Falkirk followed before Henry made the trip south in 1909 to join Leicester Fosse.

In two and a half seasons at Filbert Street, Henry racked up 96 appearances and became one of the club’s most established players. Henry’s impressive form soon alerted a number of England’s biggest clubs and in  1911, Manchester City paid Leicester a record £1000 to take the full-back to Hyde Road. City boss Ernest Mangnall gave Henry his debut in a 1-1 draw at Sunderland on  25 November 1911, with the Scot going on to play 26 further games in all competitions in his debut season at the club.

During the 1912/13 season Henry played all-but one league game as City finished 6th, while in 1913/14 he turned out 39 times in both league and cup. He played another significant part in Manchester City’s league challenge during the 1914/15 season, making 35 appearances as the blues eventually finished fifth. In addition, he also played four FA Cup games before City were eliminated by eventual finalists Chelsea in the Fourth Round.

Henry was to make 32 wartime appearances for Manchester City during the First World War, before returning to the club for the 1919/20 season – the first official competition since the armistice in November 1918. He lined up for City’s first game of the new season, a 3-3 home draw with Sheffield United, before going to play 12 more times before Christmas 1919. He was to play is last-ever game for City on 6 December 1919 in a 3-2 defeat to West Bromwich Albion at Hyde Road. Henry returned to Scotland after leaving Manchester City and finished his playing career at Edinburgh side, St. Bernard’s.

Private 42436 Henry enlisted in the 5th Reserve Regiment of Cavalry on 31 May 1916 having left Manchester some weeks earlier. He subsequently served overseas, although a definitive record of his service is yet to be found. Pte Henry was issued a Silver War Badge and discharged from the army on 2 November 1918 under Paragraph 392 (xvi) King’s Regulations: No longer physically fit for war service.

Additional information provided by Raymond Court.
A full list of sources used to create this page can be found here.