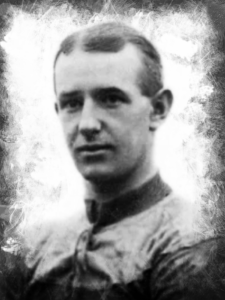 Robert Torrance (1888-1918) was born in Kirkintillock, north-east of Glasgow in 1888 and died in Belgium on 24 April 1918. Man of the match in the 1911 FA Cup Final and one of the finest central defenders in Bradford City’s history, Torrance’s untimely death during the First World War deprived the club, and his adopted hometown Bradford, of one of its greatest sons.

Torrance joined Bradford City for a mere £5 from Kirkintilloch Harp in August 1907. He made his debut on 28 November 1908 against Everton at Valley Parade. Though initially a full back, it was in central defence where he made his name.

Torrance replaced William Gildea for the FA Cup Final replay against Newcastle United in 1911. He had a magnificent game and was widely acclaimed as the man-of-the-match. Such was his performance that the Football Association went to the almost unprecedented step of striking a medal to mark his decisive contribution.

Torrance went onto establish himself as one of the finest centre-backs in the land. He also played two international trial matches for Scotland in 1913 and 1914,when Anglo-Scots met the Home-Scots. Had it not been for the outbreak of the First World War, there’s little doubt that he would have established himself in the Scotland side.

Torrance married Mary at Bradford Cathedral on the last day of 1916. Despite being an established first division footballer the couple set up home above Mary’s parents butchers shop at 103 Bridge Street – the shop was opposite the Bedford Arms, it was demolished during the 1960s. The couple later moved to a house near Bradford Moor Golf Course. His final appearance for City was in a War League game against Barnsley on 10 March 1917. Since the outbreak of War, Torrance had been a munitions worker, however during March 1917 he enlisted at the recruiting office on Bridge Street.

Gunner 222389 Torrance enlisted in the Royal Field Artillery (RFA) in March 1917 and was subsequently posted to A Battery of 162nd Brigade. During the Germans’ final all-or-nothing offensive of 1918 the battery was part of the 33rd Division which fought at the Battle of Merville from the 10th-20th April 1918. After heavy fighting the division was relived on the 21st, but the artillery stayed in the line. They were sorely needed, the German offensive was unrelenting as they tried to break through to the Belgian town of Ypres and the Channel ports beyond.

The guns moved to a position on the Reninghelst-Poperinghe road on 22nd April to support the hard pressed 49th West Riding Division. Among the 49 Division were many Bradford soldiers. Indeed, part of their artillery was the 2nd West Riding Battery, who during August 1914 had spent a week based at Valley Parade itself as they awaited the order to move to France. The 1/6th infantry was based at Belle Vue barracks, so doubtless Robert Torrance would have been recognized by many of the men his battery was now supporting.

Two days later on 24 April 1918 they were just south and east of Hallebast Crossroads on the west of the Kemmelbeek, with the horse lines at the crossroads. They came under heavy artillery fire, which decimated the batteries. The dead and injured were taken to Renhingelst and some as far back as Proven. Torrance was seriously injured and had lost an arm. He died later that day.

There are conflicting reports about how he actually died. A comrade found several photographs and other personal effects scattered around the battlefield. He posted them back to Mary Torrance in Bradford along with the news that he had died of his wounds. However, some family members believe he was killed by shelling while being treated at a ‘field hospital’.

Robert Torrance has no known grave. Either his body was never found, or he was buried in an unmarked grave. Most of the footballer’s comrades from his battery lie in the nearby Klien-Veirstraat cemetery. If he does lie in an unmarked grave, it’s likely that it’s at Klien-Veirstraat.
His death was reported in his hometown newspaper, the Kirkintilloch Herald, on 15 May.

The Sporting Chronicle of Saturday contained information that Bobby Torrance, the famous Bradford City centre half-back, whose smashing up tactics did so much to win the English cup for the Valley Parade club when they met Newcastle United in the replayed final at Old Trafford, in 1911, has been killed in action. Torrance belonged to Kirkintilloch, his family residing in Kerr Street. He served his apprenticeship in the boat-building yard of Messrs. J. & J. Hay, and before it was completed he joined the Bradford City team, going there from Kirkintilloch Harp. He was six seasons in England, and after the war broke out he came back to Kirkintilloch, and finished his apprenticeship. Thereafter he returned to Bradford, where he leaves a widow and one child. Up to a year ago he was employed on munitions, but learning of the death in action of James Speirs, the inside right who Captained the Bradford City team, he promptly enlisted in the R.F.A. and he has now died from wounds received on the Western front.

Unsurprisingly, the report isn’t completely accurate. Jimmy Speirs was in fact still alive and well when Torrance joined up in March 1917. Thus the reasons why he enlisted at that time are unknown. Torrance is commemorated on the Tyne Cot Memorial to the Missing, near Ypres, Belgium. Though the Tyne Cot memorial opened in July 1927, Robert’s name wasn’t added, along with 90 others, until 1930 on the addenda panel.