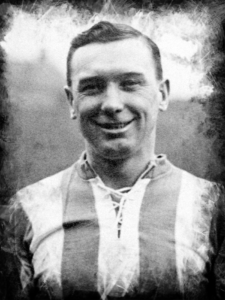 Clement Stephenson (1890-1961) was born in Seaton Delaval, Northumberland on 6 February 1890 and died in Huddersfield on 24 October 1961. A two-time FA Cup winner with Aston Villa, Stephenson went on to win three league titles and a further FA Cup at Huddersfield Town, who he later managed. Capped once by England, Stephenson served in the Royal Navy during the First World War and had two younger brothers, Jimmy and George, who also played for Aston Villa.

Stephenson soon made a name for himself at Villa Park and was part of the side that beat Sunderland 1-0 to win the 1913 FA Cup at Crystal Palace. By the time official competition had been suspended at the end of the 1914/15 season, Stephenson had played 132 league and 13 FA Cup matches for Villa, scoring 55 goals.

After serving in the Royal Navy during the First World War, Stephenson returned to football following the Armistice and was to win a second FA Cup in 1920 when Villa beat Herbert Chapman’s Huddersfield Town 1-0 at Stamford Bridge.

Mid-way through the 1920/21 season, Chapman would persuade Stephenson to leave the Midlands and move to Huddersfield, who paid a reported £3000 for his services. In his first full season at Leeds Road, Stephenson became the first player in the 20th century to win three FA Cup winners’ medals when his side beat Preston North End 1-0 at Stamford Bridge. He would then play a key role in Huddersfield’s dominance of English football as they won three successive league titles between 1924 and 1926. He would also win his first and only international cap during that period, playing in England’s 2-1 loss to Wales on 3 March 1924.

Stephenson finally retired in May 1929, when he was appointed successor to Town manager Jack Chaplin. Going on to become the club’s longest-serving manager, Stephenson held the role until he retired from the game completely in June 1942.

After working as a shell-maker in a munitions factory, Ordinary Seaman Z/7344 Stephenson joined the Royal Naval Volunteer Reserve (Bristol Division) on 28 January 1918 and was posted to the RN Depot at Crystal Palace on 29 April 1918. He subsequently spent much of his time as a physical training instructor at Crystal Palace and was promoted to the rank of leading seaman on 17 October 1918. Stephenson was finally demobilised on 17 January 1919.