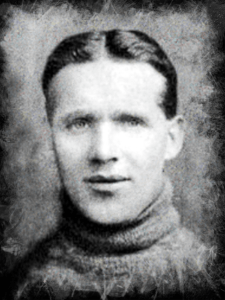 Colin McKenzie Hampton MM (1888-?) was born in the Scottish city of Brechin on 1 September 1888. A sound and reliable goalkeeper who played for Chelsea, Motherwell, Brechin City and Crystal Palace, Hamilton also served in the British Army during World War One and was awarded the Military Medal for bravery.

After starting his career at Brechin Rovers, Hampton had a brief spell at Brechin City before moving to Motherwell in 1909. He would soon establish himself at Fir Park and over the next five seasons Hampton played more than 130 games as Motherwell’s first-choice keeper. The consistent displays soon caught the attention of a number of clubs south of the border and in April 1914, Chelsea persuaded him to leave Scotland and move to Stamford Bridge. He would make his debut for his new club in a 2-0 home win over Everton on 25 April.

The 1914/15 campaign saw Hampton act as understudy to first-choice keeper Jimmy Molyneux and he would make just one appearance before official competition was suspended for the duration of World War One. After serving overseas with the British Army, Hampton returned to Stamford Bridge following the armistice and would soon find playing time easier to come by.

During the 1919/20 season, Hampton made 15 appearances as Chelsea finished third in the First Division and reached the semi-final of the FA Cup. Despite then making just 15 appearances over the next two seasons, Hampton would play 28 times during the 1922/23 campaign and 22 in 1923/24. His final game for Chelsea came in a 2-0 defeat at Everton on 16 February 1924.

After a brief spell back at Brechin City, Hampton would return to London in April 1925 when he signed for Crystal Palace. The move was to prove unsuccessful, however, and after just three further appearances Hampton finally called time on his playing career in May 1926.

Gunner 2338 Hampton joined the Motor Machine Gun Service (MMGS) in August 1915 and was later posted to Bisley, Surrey.  Originally formed as part of the Royal Field Artillery (RFA), the MMGS was intended to provide mobile machine gun support through its motorcycle and sidecar units and armoured cars. The static nature of fighting on the Western Front soon changed its role, however, and the men of the MMGS were to be largely deployed as conventional machine-gun sections.

The MMGS were incorporated into the Machine Gun Corps (MGC) on its formation in October 1915 and were subsequently re-designated as the Machine Gun Corps (Motors). Hampton would soon rise through the ranks and by late 1916 he was a sergeant. Hampton would go on to serve in Mesopotamia and was captured by Turkish troops in 1918 when his armoured car was hit by shellfire. Sgt Hampton was subsequently released following the Armistice and was awarded the Military Medal. He was finally demobilised and transferred to Class “Z” Army Reserve on 30 May 1919.