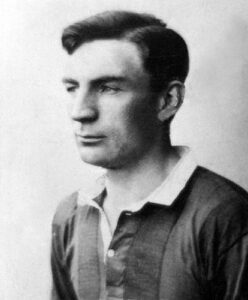 Curtis “Tommy” Booth (1891-1949) was born on 12 October 1891 in Gateshead and died in the Dutch city of Amsterdam on 29 October 1949. An inside-forward, Booth played for Newcastle United, Norwich City and Accrington Stanley either side of the First World War, during which he served as a soldier in the British Army. Booth later worked as a coach in a number of countries, including the Netherlands where he lived until his death.

Booth began his career in the north-east of England where he played for amatuer side Wallsend Elm Villa. In November 1913, Booth signed professional terms at Newcastle United and made his debut on 9 September 1914 in a 0-0 draw with the Wednesday at St James’ Park. He would play 18 further league games for Newcastle during the 1914/15 season, scoring twice before official competition was suspended for the duration of the war.

Left without a club when Newcastle took the decision to suspend all footballing operations, Booth was among a number of players who moved to Leeds City ahead of the 1915/16 campaign. Despite working in the north-east, Booth managed to play eight games as a wartime ‘guest’ for Leeds as they finished 10th in the Midland Section Principal Tournament and won the Northern Division of the Midland Subsidiary competition.

Having seen his career hindered by the First World War, Booth returned to Newcastle United in 1919 and scored four goals in 15 games during the 1919/20 campaign. It would prove to be his last season at the club and in September 1920, Norwich City paid £800 to take Booth to Norfolk. He would spend three seasons at Carrow Road before moving to Accrington Stanley in 1923, where he took the role of player-manager for the Lancashire club’s debut season in the Football League.

Booth’s time as a Stanley player proved to be short-lived, however, as he was forced off the field just 20 minutes into his debut against Darlington with knee ligament damage. It would prove to be the final match of his playing career and he was forced to retire soon after. In retirement, Booth became a respected coach on the continent and spent time at clubs in Germany, France, Egypt, Turkey and the Netherlands. He lived in Amsterdam in later life and died there on 29 October 1949.

Private 39691 Booth enlisted in the Durham Light Infantry on 8 December 1915 and subsequently underwent basic training before leaving for France in 1916. He would then see action during the Battle of the Somme and Third Ypres, and rise to the rank of corporal. In August 1918, Booth was among the troops that helped stem the German advance at Villers-Bretonneux, during which he was wounded. After recovering from his injuries, Booth was finally demobilised from the British Army on 28 August 1919.