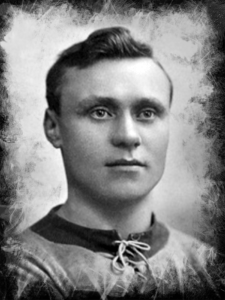 Richard Bond (1883-1955) was born on 14 December 1883 in Preston, Lancashire and died there on 25 April 1955. A sometimes controversial outside-forward, Bond played over 500 hundred games during his career and won eight international caps for England. During the First World War, Bond served on the Somme with the Bradford Pals before becoming a prisoner of war. He resumed his career in football on his return to Britain and died in 1955 aged 77.

Bond was a pre-war regular soldier with the Royal Field Artillery but was discharged by purchase in 1901. After subsequently joining Preston North End, Bond made his Football League debut on 6 September 1902 and would go on to score 50 goals in 164 league and cup games for the club. This form saw Bond win his first international cap on 25 February 1905, when England drew 1-1 with Ireland at Ayresome Park, Middlesbrough. He would play four further matches for his country by the time he left Deepdale to join Bradford City in May 1909.

Bond would soon become a key member at City and won three more England caps during his time at the club. Despite his importance to the side, Bond was dropped for the 1911 FA Cup Final after serving a suspension for using ‘improper language’ towards the crowd during a game at Arsenal.

Bond’s suspension from 8 March – 8 April 1911 prevented him playing in both the quarter and semi-final, however, he had returned to league action before the final against Newcastle United. Nonetheless, City manager Peter O’Rourke kept faith with the side that had got the club to the final and Bond was one of four named reserves for the 0-0 draw at Crystal Palace and the subsequent 1-0 replay win at Old Trafford. Unfortunately, Bond’s antics at Arsenal were not the first time he had found himself in hot water with his disciplinarian manager. Only one year earlier Bond had been suspended following a wild night out in Otley with teammates Jimmy McDonald and Robert Campbell.

Having enlisted in the British Army on 22 April 1915, Bond would make a recruitment appeal at half-time of City’s 3-0 loss at neighbours Park Avenue on 28 April 1915. He subsequently began army training on competition of the 1914/15 season. Following the armistice, Bond returned to Valley Parade and would play three further seasons for City before moving to Blackburn Rovers ahead of the 1922/23 campaign. He finally retired from the game after brief spells at amateur sides Lancaster Town and Garstang. In retirement Bond ran a fish and chip shop in Garstang, before becoming a publican in the town. He died in Preston on 25 April 1955, aged 77.

A former regular solider with the British Army, Private 922 Bond enlisted in the 18th (Service) Battalion of the West Yorkshire Regiment, better known as the Bradford Pals, on 22 April 1915 and began army training with his unit. In May 1915, the battalion joined 93rd Brigade of 31st Division and moved to South Camp, Ripon. They then moved to Hurdcott Camp near Salisbury Plain in preparation for deployment overseas.

On 6 December 1915, Bond left Britain with his and set sail for Egypt to defend the Suez Canal.  After disembarking at Alexandria on 22 December 1915, the Bradford Pals spent three months in Egypt before leaving for France aboard the HMT Briton in March 1916. On arrival in Marseille, the battalion, including the-now Sergeant Bond, travelled north by train to Pont Remy. They then made their way to Bertrancourt on foot. Bond served in a machine gun section during the Battle of the Somme, surviving the heavy losses the Bradford Pals suffered during their opening day’s assault on the village of Serre.

On 27 July 1916, the battalion were attacked by a German raiding party which killed over sixty men and captured several others. Among the latter was Dickie Bond, who had been shaving at the time of the raid and was taken completely unawares. Transferred to a camp in Germany, Bond would spend the next two years as a prisoner of war. On 13 June 1918, he was transferred to an internment camp in neutral Holland from where he was repatriated from on 18 November 1918. Bond was finally demobilised on 9 March 1919, having been promoted to the rank of company sergeant major (CSM) on his return to Britain.

Additional information provided by David Pendleton.
A full list of sources used to create this page can be found here.