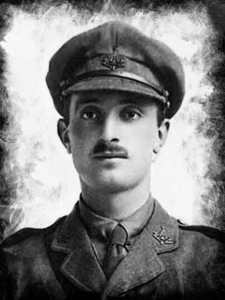 Donald Simpson Bell VC (1890-1916) was born in Harrogate, North Yorkshire on 3 December 1890 and died in northern France on 10 July 1916. A talented all-round sportsman who played both amateur and professional football, Bell joined the British Army soon after the outbreak of World War One before losing his life during the Battle of the Somme. Following his death, Bell was awarded the country’s highest award for gallantry, the Victoria Cross.

Donald Bell’s fledgling football career began in his hometown of Harrogate, first during his time as a pupil at Christ Church School and then at amateur side Starbeck while he worked as a student teacher. In 1909, Bell moved to London to begin a teacher-training course at Westminster Methodist College and agreed to turn out as a amateur for Southern League side, Crystal Palace. Despite establishing himself in the college football, rugby and cricket teams at Westminster, Bell would make no appearances for Palace but did return to Harrogate during holidays to play local football.

On completion of his studies in 1911, Bell moved back to North Yorkshire where he took up a teaching post at Starbeck College. Bell also agreed amateur terms with Newcastle United but was limited to a handful of appearances for the club’s reserve team. He would also play for Bishop Auckland during this period and became a regular in their side before joining Mirfield United in 1912.

In October 1912, the 22-year-old earned his first professional contract when he signed terms with second division Bradford Park Avenue. Handed his debut in a 5-1 triumph over Wolverhampton Wanderers on 16 April 1913, Bell would go on to play a further four games for the club during the 1913/14 season as they won promotion to the English top flight. Soon after the outbreak of the First World War in August 1914, Bell asked his club to release him from his contract so he could join the British Army. This request was granted and Bell would play no part in the 1914/15 season.

Private 15722 Bell enlisted in the 9th (Service) Battalion of the West Yorkshire Regiment in November 1914 and subsequently underwent military training. After a period spent at Belton Camp, Lincolnshire the battalion moved to Witley Camp near Godalming where Bell was appointed lance corporal. He was then commissioned into the 9th (Service) Battalion of The Yorkshire Regiment (The Green Howards) as a second-lieutenant and sent to France in late 1915. After spending time in the Armentieres, Bruay, and Souchez-Angres sectors, the began preparations for the upcoming British offensive on the Somme. Bell would also marry wife Rhoda during a period of home leave in June 1916.

The opening day of the battle saw the  placed in reserve near the town of Albert. They were then detailed to attack positions at Horseshoe Trench, which ran from Scots Redoubt to Lincoln Redoubt, on 5 July 1916. As Bell and his battalion made their way towards their objective, they immediately came under heavy German machine gun fire. With his men caught in the open, Bell traversed down a communication trench with two men and neutralised the position – reportedly killing as many as 50 enemy soldiers. Five days later, Bell was killed in similar attack on a machine-gun post near the village of Contalmaison and buried close to where he fell.

For his bravery at Horseshoe Trench on 5 July, Second Lieutenant Bell was awarded the British Army’s highest award for gallantry, the Victoria Cross. The two men who accompanied him, Corporal Colwill and Private Batey, were both awarded Distinguished Conduct Medals. The London Gazette carried the following citation on 9 September 1916:

For most conspicuous bravery. During an attack a very heavy enfilade fire was opened on the attacking company by a hostile machine gun. 2nd Lt. Bell immediately, and on his own initiative, crept up a communication trench and then, followed by Corpl. Colwill and Pte. Batey, rushed across the open under very heavy fire and attacked the machine gun, shooting the firer with his revolver, and destroying gun and personnel with bombs. This very brave act saved many lives and ensured the success of the attack. Five days later this very gallant officer lost his life performing a very similar act of bravery.

King George V would present Bell’s wife with his medal at Buckingham Palace five months later, before his body was moved from its initial resting place following the armistice and reinterred at Gordon Dump Cemetery. In November 2010, the Professional Footballers’ Association bought Bell’s Victoria Cross and campaign medals at auction for a price of £21,000. They are now on display at the National Football Museum.