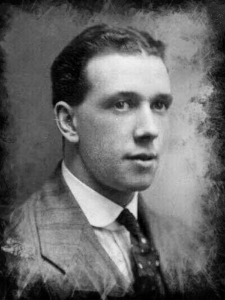 Edward John Lightfoot (1889-1918) was born in Litherland, Lancashire on 13 November 1889 and died in northern France on 20 July 1918. A reserve team player for much of his time at Tottenham Hotspur, the wing-half still managed to make more than 60 appearances during four seasons at White Hart Lane. During the First World War, Lightfoot served overseas with the British Army and would lose his life just four months before the Armistice.

After beginning his career at local side Harrowby, Lightfoot move to Southport Central in 1910 and would soon establish himself as one of the Lancashire Combination club’s most consistent performers. Having impressed sufficiently during his short stay at Southport, Lightfoot was persuaded to move to London in May 1910 when he signed for first division side Tottenham Hotspur.

Lightfoot would soon become a regular in the reserve team at White Hart Lane but had to wait until 14 October 1911 to make his senior debut. He would then go on to make 61 league and five FA Cup appearances over the following four seasons, scoring on two occasions. The most productive period of Lightfoot’s career came during the 1914/15 campaign when he played 25 matches for a Tottenham side badly hit by the loss of a number of players to the military.

Following the culmination of the 1914/15 season, Lightfoot returned to Lancashire and would turnout for former club Southport Central before joining the British Army. He would then also play for both his unit team and army representative sides, including a number of matches at Fulwood Barracks in Preston, Lancashire.

Gunner 168781 Lightfoot joined the Royal Garrison Artillery (RGA) in early 1916 and underwent training before being posted overseas on active service. By mid July 1918, Lightfoot had been promoted to the rank of sergeant and was serving with 1st Siege Battery RGA. Details surrounding Lightfoot’s subsequent service are unclear, however, he was taken to 1st Australian Casualty Clearing Station at Esquelbecq at some point during this period and would die there from unknown causes on 20 July 1918. Lightfoot was later buried at Esquelbecq Military Cemetery.