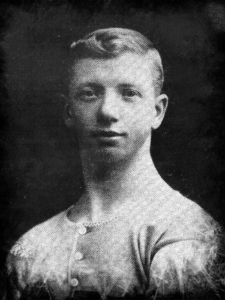 Edwin Gladstone Latheron (1887-1917) was born in the village of Brottton, North Yorkshire on 22 December 1887 and died in Belgium on 14 October 1917. An England international and two-time league champion, Latheron played more than 300 games in 11 years at Blackburn Rovers and scored 120 goals. During the First World War, Latheron would serve as a gunner in the Royal Field Artillery and lost his life in the Third Battle of Ypres.

A diminutive but prolific inside-forward, Latheron learnt his trade playing junior football for South Bank Corinthians before moving to Northern League amateur side, Grangetown Athletic. He was then recruited by Blackburn Rovers in 1906 after the Lancashire club saw him play an FA Amateur Cup tie against Blackburn Crosshill. Latheron was subsequently handed his debut in a 4-1 home win over Middlesbrough on 22 December 1906, before scoring his first goal for Bob Middleton’s side three days later in a 4-0 triumph against Newcastle United.

By the end of his first season at Ewood Park, Latheron had scored five times in 18 games and had established himself as one of the club’s brightest talents. Known as “Pinkie” due to his fair complexion, Latheron notched 46 goals in 126 games over the next four seasons and would then help Rovers to the First Division title in 1911/12, having struck seven times in 22 matches.

The following season was to prove less successful for Rovers as they struggled for consistency to eventually finish fifth in the table and relinquish their league crown. For Latheron, however, the season would prove to be the second-most productive of his career as he hit 16 goals in 40 league and cup appearances. This impressive form was rewarded on 17 March 1913, when Latheron was handed his international debut in a game against Wales at Ashton Gate, Bristol. The Rovers man would subsequently score England’s second goal in a 4–3 victory.

Latheron’s prolific goalscoring continued during the 1913/14 season, as he formed a devastating partnership with top-scorer Danny Shea to fire Rovers to their second league crown in three seasons. It was the pinnacle of Latheron’s career and came after he had won his second international cap in England’s 3-0 loss to Ireland at Middlesbrough’s Ayresome Park on 14 February 1914. The 1914/15 season would prove to be the most prolific of Latheron’s career and also his last as a professional footballer. Despite his contribution of 17 goals in 37 games, however, Rovers were beaten into third place as Everton pipped Oldham Athletic to the title by one point.

Latheron’s last official game came on the final day of the 1914/15 season when Rovers beat Middlesbrough 4-0 at Ewood Park. Immediately after the fixture, both the Football League and Southern League suspended competition for the duration of the war. Despite seeing his professional career put on hold, Latheron would continue to play unofficial wartime football and turned out as a guest for Blackpool during the 1915/16 campaign. He then returned to Rovers for the 1916/17 season and would play his final game for the club on 17 March 1917.

Including wartime football, Latheron had played a total of 303 games for Rovers and scored 120 goals. He had also represented the Football League on three occasions and won two international caps for his country.

Gunner 160461 Latheron joined the Royal Field Artillery (RFA) in 1916 and was subsequently posted to No. 2 Depot in Preston, Lancashire. Once there, Gnr Latheron soon found himself playing football again and he would take part in an inter-county match between Lancashire and Yorkshire-based army sides in mid-1916.

On Christmas Day 1916, Latheron played in a fundraising match between a Preston military team and Bolton Wanderers at Burnden Park. Watched by 4,000 spectators, the match was won by Latheron’s side 4-2. Latheron was then posted overseas and joined 75th Battery, 5th Brigade RFA on the Western Front. The unit had served with the 4th Canadian Division since September 1916, but became an army brigade in July 1917 and was subsequently attached to Second Army.

In October 1917, the brigade had been part of the artillery support for the first assault on the village of Paschendaele. In dire conditions, British guns had been bogged down in the quagmire and had also run short of ammunition. Furthermore, German counter-battery fire had been highly-effective and heavy losses were sustained.  Among the dead was Latheron, who was killed on 14 October 1917. He was 29-years-old and left a widow and young child.

On Wednesday 24 October 1917, the Liverpool Echo reported Latheron’s death, quoting a letter written by his Rovers teammate, Alex McGhie, who was also serving on the Western Front. In it, he said:

A shell burst near their dugout and the splinters, passing through the opening, killed Latheron and another gunner. Latheron was happy and strong and was a tremendous worker, and if anybody has done his bit in this war it is he. We are going out of action tomorrow, and intended to have a good time.

Latheron was subsequently buried at Vlamertinghe New Military Cemetery, which is located 5 Kms west of the Belgian town of Ypres. In March 1918, Latheron’s widow, Bertha, was authorised effects to the total of £4 8s 6d by the army before being given another £4 in December 1919.