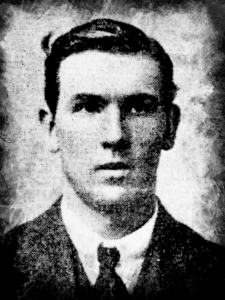 Edward William Thompson (1894-1918) was born in Prudhoe, Northumberland in July 1894 and died in northern France on 6 November 1918. A full-back by trade, Thompson played just one game for Fulham before the First World War brought a premature end to his fledgling football career. After enlisting in the British Army when official competition was suspended, Thompson would eventually lose his life just one week before the Armistice in November 1918.

Thompson began his career at Northern Alliance club Spen Black & White before joining Fulham as a 20-year-old in 1914. Despite the move, Thompson would find opportunities difficult to come by at Craven Cottage and played just one game, a 2-1 home win over Grimsby Town on 13 February 1915, before official competition was suspended following the culmination of the 1914/15 season.

Private 16531 Thompson enlisted in the 2nd Battalion of the Scots Guards in February 1917 and underwent training in Britain before being posted overseas for active service. The battalion would take part in heavy fighting during the Third Battle of Ypres and the Battle of Cambrai in 1917, however, it is unclear whether Thompson was with the unit during that period.

The battalion would then see action at St. Quentin, Bapaume, Arras and Albert during the Hundred Days Offensive, before finally taking part in the last battles on the Western Front in November 1918. Having been involved in fighting near the Sambre Canal, Thompson was killed in action on Wednesday 6 November 1918. He was 24-years-old and is buried at Bermeries Communal Cemetery, located 20 kilometres south-west of the French city of Valenciennes.