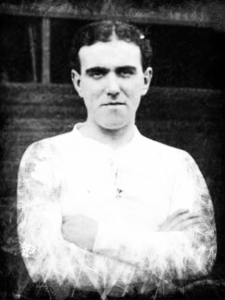 William Findlay Weir (1889-1918) was born in Glasgow on 18 April 1889 and died in Brighton on 9 July 1918. An experienced wing-half, Weir began his career in Scottish junior football before going on to play more than 170 games during spells at English top flight clubs The Wednesday and Tottenham Hotspur. During the First World War, Weir joined the British Army and would serve overseas before returning to Britain where he subsequently died in hospital aged 29.

Weir started his career at local side Campvale before a brief spell at Waverley. In 1906, the teenager joined Maryhill and would spend the next three seasons at Lochburn Park. After a string of impressive performances, Weir was persuaded to leave Scotland in May 1909 when he journeyed south of the border to join The Wednesday. After establishing himself in the reserve side, Weir was handed his senior debut in a 0-0 home draw with Notts County on 19 February 1910 and would go on to make 72 appearances for the club, scoring one goal.

In May 1912, Tottenham Hotspur took Weir to White Hart Lane where he made his first team bow in a 2-1 loss to Derby County on 21 September 1912. Over the next three seasons Weir would play 96 league and five FA Cup matches for Spurs, firmly establishing himself as first-choice half-back at the club. His final game came on 24 April 1915 when his side slumped to a 5-0 defeat at Sunderland. In total, Weir made 173 appearances during his six-season stay in English football, scoring on three occasions.

Sapper 96038 Weir joined the Royal Engineers (RE) in early 1915 and was subsequently posted to France on 18 November. Having already risen through the ranks, Weir was promoted to sergeant in January 1916 and was wounded later that year. After recovering from his injuries, Weir returned to his unit in September 1916 and by mid-1918 was based at the RE Demolition Training Depot in Newark, Nottinghamshire.

On 9 July 1918, Sgt Weir died at 2nd Eastern General Hospital in Brighton. The circumstances surrounding the footballers’ death are unknown but he was subsequently buried at Glasgow (Lambhill) Cemetery, Scotland. He was 29-years-old.