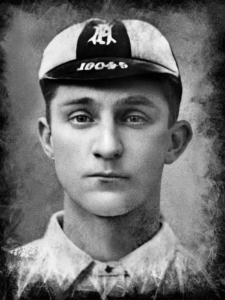 Frank Booth (1882-1919) was born in Hyde between June and September 1882 and died in Manchester on 22 June 1919 aged 37. Known as Tabby, the popular winger played more than 150 club games during a 12-year career and also represented England once. Booth served in the British Army during the First World War, before dying just seven months after the armistice.

Booth began his career at local amateur club Hyde before moving to Second Division Glossop in 1900 and then Stockport County in 1901. He was to  spend just one season at Edgely Park, scoring one goal in six appearances, before again moving in the summer of 1902 – this time to recently-relegated Manchester City. He was handed his City debut on the opening day of the 1902/03 season, a 3-1 victory against Lincoln City at Hyde Road, but would play just eight further games that season after injury hamper his progress.

Booth’s second year at City proved more productive, however, as he struck three times in 24 league games to help them to second spot behind the Wednesday. In the FA Cup, Booth played every game of City’s run to the 1904 final, where they beat Bolton Wanderers 1-0 at Crystal Palace. It was Booth’s only piece of silverware as a professional footballer.

During the 1904/05 campaign, Booth enjoyed the most productive season of his playing career by making 35 appearances and scoring eight goals. On 25 February 1905, Booth also made his sole appearance for England in a 1-1 draw with Ireland at Ayresome Park, Middlesbrough. Despite these individual achievements the season would end on a sour note for his club, as they became embroiled in the now-notorious bribery scandal.

City were subsequently subjected to an official investigation Football Association during the 1905/06 campaign, who eventually ruled that they had been guilty of serious financial malpractice. At the end of the season, they were ordered to pay a £900 fine, while 17 players were fined individually and suspended. City were subsequently forced to sell their entire team – including Booth, who had just struck seven goals in 29 games for the blues.

The 1906/07 season saw Frank Booth play for Bury, then managed by former Manchester United goalkeeper Archie Montgomery. In three seasons at Gigg Lane, Booth would make 61 appearances in all competitions and score four goals. In 1911, after a spell at Scottish side Clyde, Booth made a surprise return to Manchester City. Despite starting the opening three games of the season, Booth struggled with form and injury and would make just four appearances in the entire season. Booth retired from the game in the summer of 1912.

After served 333 days overseas, Booth returned to Britain on 16 February 1919 and was transferred to “Z” Reserve on 27 March 1919, a class comprised of soldiers who returned to civilian life following the armistice but were obliged to serve should they be called upon. Soon after, it was discovered that Booth had a tumour on his heart that proved to be inoperable. After being admitted to the Manchester Royal Infirmary in Chorlton-on-Medlock, Booth died on 22 June 1919, aged just 37. He left a widow, Mary, and two young children and is buried with 31 other military graves in Denton Cemetery, Tameside.