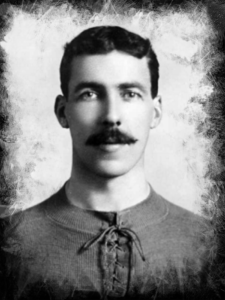 Frank James Hesham (1879-1915) was born in Gorton, Manchester in 1879 and died on 17 November 1915 in Belgium. A skillful outside right, Hesham played more than 50 Football League games during spells at Manchester City, Oldham Athletic and Stoke, and later featured for Southern League side Croydon Common. During the First World War, Hesham enlisted in the British Army and would eventually lose his life on the Western Front.

Hesham began his football career at local side Gorton St Francis before joining Manchester City as a teenager. Despite making his City debut in a 3-0 defeat at Newcastle United on 6 February 1897, Hesham struggled to establish himself in Sam Omerod’s side and left to join Crewe Alexandra after just two further appearances. A brief spell at Accrington Stanley followed before Hesham signed for Stoke in May 1904.

After playing 17 times for the Potters, scoring once, Hesham was on the move again in 1905 – this time to London side, Leyton. In August 1907, Oldham Athletic gave Hesham a Football League return and he made his Latics debut in a 3-0 victory over Hull City on 28 September 1907. His subsequent two-year stay at Boundary Park proved to be one of the most productive spells of his career and he had played 29 League and FA Cup games by the time he left Oldham to join Preston North End in 1909.

Hesham’s move to Deepdale would prove short-lived and after just two months, during which he made no senior appearances, Hesham left North End to join Southern League side Croydon Common. He would soon established himself as an integral part of his new club and was to play 55 times, scoring an impressive 27 goals. A brief spell at Hyde United followed, before Hesham finally finished his career at Newton Heath Albion. At the outbreak of the First World War, Hesham was working as a clerk in Manchester.

Gunner 53546 Hesham, who had pre-war service with the 4th Volunteer Battalion of the Manchester Regiment (time-served), enlisted in the Royal Garrison Artillery (RGA) on 18 November 1914 and was subsequently sent for basic training. After leaving Number 2 Depot, Gosport, Gnr Hesham was posted to 21 Siege Battery RGA and landed in the French port of Boulogne on 25 May 1915. On 29 September 1915, Hesham was granted short leave before returning to his unit on 3 October 1915 – just two weeks before the Second Battle of Ypres. On 17 November 1915, Gnr Hesham was killed in action and subsequently buried at La Clytte Military Cemetery, located 8km south-west of Ypres. He left a widow and a 14 year-old son who lived in Lonsight, Manchester.