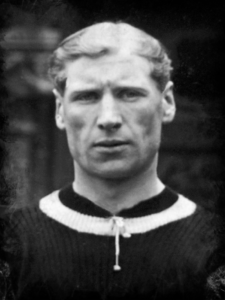 Frank Moss (1895-1965) was born in Aston, Birmingham on 17 April 1895 and died in Worcester on 15 September in 1965. An England international half-back and Aston Villa captain, Moss played almost 300 matches during a lengthy career and also won the FA Cup. During the First World War, Moss served in the British Army and was wounded during the Third Battle of Ypres.

Birmingham-born Moss began his career at local outfit Aston Manor before joining Southern League side Walsall in 1912. Two years later, Moss made the short move to Aston Villa and was handed his debut in a 1-1 draw at Notts County on 5 April 1915. He then played in Villa’s 1-0 defeat against Manchester United two weeks later, before his career was put on hold when official competition was suspended for the duration of the war.

Moss returned to Villa Park in 1919 and played his third game for the club against Sunderland on 30 August. By the end of the 1919/20 season, Moss had made 18 appearances in all competitions and was part of the side that beat Huddersfield Town 1-0 to lift a record-breaking sixth FA Cup on 24 April 1920. Moss was then handed the first of five international caps when England drew 1-1 with Ireland on 22 October 1921.

When Moss finally left Villa Park to join Cardiff City in January 1929, he had played 281 games in all competitions and scored eight goals. He had also become one of the most popular and highly-respected captains in the club’s history. An ageing Moss would play five times for Cardiff during the latter part of the 1929/30 season, before finally calling time on his career after spells at local amateur clubs Bromsgrove Rovers and Worcester City. He eventually died in 1965 aged 70.

Private 32799 Moss enlisted in the 7th (Service) Battalion of the Lincolnshire Regiment in November 1915 and underwent training.  Once posted overseas, Moss was soon promoted and took part in heavy fighting during the Third Battle of Ypres in 1917. After sustaining wounds to his left knee, Moss returning to England and was employed as a physical training instructor. He finished the war as a corporal in the 2nd Lincolns.