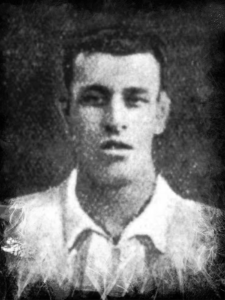 Frederick Waterson (1877-1918) was born in Burton-on-Trent, Staffordshire in 1877 and died in northern France on 12 October 1918. A hard-working full-back, Waterson spent the majority of his career at Burton Swifts before having brief spells at Fulham and Doncaster Rovers. During the First World War, Waterson join the British Army and would lose his life just four weeks before the Armistice.

Waterson began his career at Burton Swifts, where he made his debut in a 1-1 draw at Lincoln City on 20 March 1896. Over the following six season, Waterson established himself as a first-team regular and eventually made 132 appearances for the club, scoring nine goals. After playing a further 34 games for the newly-amalgamated Burton Swifts, Waterson finally left the Staffordshire club to join Fulham after a dispute over unpaid wages in the summer of 1903.

Waterson would find opportunities limited  at Craven Cottage, however, and spent much of his time captaining the reserve side. Despite playing just 14 first-team matches in six seasons, he was rewarded for his services for the second string with a benefit game on Boxing Day 1908. He finally left Fulham in 1909 and moved to South Yorkshire to begin work at Doncaster Railway Works, where he would also have a brief spell at local club Doncaster Rovers before retiring from the game.

Private 4237 Waterson initially enlisted in the 1/5th King’s Own Yorkshire Light Infantry during the First World War before subsequently transferring to the 2/6th Durham Light Infantry (Service No. 253232). By 1918, Waterson had risen to the rank of corporal and was serving in the recently-formed 29th DLI. As part of 41st Brigade, 14th (Light) Division, the battalion had landed at Boulogne on 3 July 1918 before going on to take part in the final allied advances of the war in France and Flanders.

It was during the period that Cpl Waterson would sustain the wounds that would eventually take his life at a casualty clearing station near the French town of Hazebrouk on 12 October 1918. Waterson was 41-years-old at the time of his death and was subsequently buried at La Kreule Military Cemetery which is located 2 km north of Hazebrouck, on the road to St Sylvestre-Cappel and Steenvoorde.