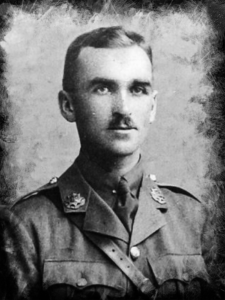 Frederick George Wheatcroft (1882-1917) was born in Alfreton, Derbyshire in July 1887 and died near the French village of Bourlon on 26 November 1917. An England amateur international, Wheatcroft worked as a school teacher for much of his career before going on to play more than two hundred games as a professional for Swindon Town. During the First World War, Wheatcroft served as an officer in the British Army and would ultimately lose his life on the Western Front.

A talented inside-forward, Wheatcroft began his career at local side Alfreton Town before spending two seasons at Derby County. Between 1904 and 1905, Wheatcroft enjoyed two separate spells at Swindon Town, scoring nine times in 23 games, during which time he also turned out for Fulham and Derby County again. After returning to the Baseball Ground during the 1905/06 campaign, Wheatcroft finally signed professional terms and would go on to play a further 20 games in three seasons at Derby.

Following a short spell at Reading, Wheatcroft moved to Swindon Town in the summer of 1909 where he would go on to enjoy the best period of his career. He helped Swindon to the Southern League title during the 1910/11 season, scoring a total of 16 goals, and again in 1913/14. He would also star in their runs to the FA Cup semi-final in both 1910 and 1912. Having subsequently played as a wartime guest for a number of clubs, Wheatcroft eventually joined the British Army and brought his playing career to an end.

Wheatcroft originally attested under Lord Derby’s Group Scheme without being called for service. He was subsequently conscripted into the 1/5th East Surrey Regiment under the Military Service Act in May 1916. Private 201674 Wheatcroft settled well into military life and was soon appointed lance corporal. He was then promoted to corporal before being appointed lance sergeant. In May 1917, Wheatcroft’s leadership qualities were further recognised by the military and he was commissioned as a second lieutenant.

By November 1917, 2nd Lt Wheatcroft found himself commanding a platoon of B Company, 13th East Surreys during the British offensive near Cambrai. On 25 November, the battalion were tasked with clearing the village of Bourlon and ground close to Bourlon Wood. Attacking from a sunken lane, the battalion were badly mauled by enemy machine gun and mortar fire which inflicted significant casualties.  Unable to advance any further, the men clung on desperately until ordered to withdraw the following day.

It was during the attempted withdrawal of 26 November that Wheatcroft was killed. The 35-year-old was one of 239 casualties sustained by 13th East Surreys by time they were eventually relieved from positions near Bourlon on 27 November 1917. Wheatcroft was later buried at Anneux Military Cemetery, located just south of the main Bapaume-Cambrai Road. In 1927, a memorial was erected to Wheatcroft at the church in his home village of Alfreton.