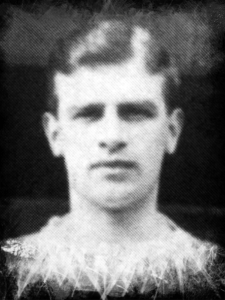 George Henry Bowler (1890-1948) was born on 23 January 1890 in Newhall, Derbyshire and died in Bethnal Green, London in October 1948. A wing-half who spent much of his career playing reserve team football, Bowler served in the British Army during the First World War before returning to the game after the Armistice. He died in 1948 aged 58.

Bowler began his career at local amateur club Gresley Rovers before joining Derby County in May 1911. Despite becoming a regular in the reserve side Bowler would play just one senior game, a 3-0 home loss to Sunderland on 26 February 1913, before leaving the club to sign for Tottenham Hotspur in the summer of 1913.

After establishing himself in the second string at White Hart Lane, Bowler made his senior debut in an unofficial Football Charity Fund match against Crystal Palace in October 1913. He was then handed his competitive first team debut in a 1-1 draw at Blackburn Rovers on 28 February 1914 and would play in a 1-0 home win against Preston North End one week later. Bowler’s third and final official game for Spurs came in a 0-0 home draw with Liverpool on 4 April 1914.

Bowler would subsequently feature solely in the reserve side at Tottenham and would make just two appearances for the club during unofficial wartime competition. After serving overseas during the war, Bowler was released by Spurs in 1919 and signed for Luton Town. His time at Kenilworth Road would subsequently prove disappointing and he finally retired from the game after failing to establish himself beyond the reserve side.

Private F27 Bowler was one of the first men to volunteer for the newly-raised 17th (Service) Battalion, The Middlesex Regiment (1st Football) at Fulham Town Hall on 15 December 1914. After spending time in training camps at Cranleigh, Surrey and Clipstone near Mansfield, the battalion moved to Perham Down in August 1915 where they prepared for deployment overseas.

The 17th Middlesex arrived in France on 17 November 1915 and would experience its first taste of life in the trenches near the mining town of Loos. The battalion took part in its first offensive action near Souchez in the Spring of 1916, before suffering heavy losses at Delville Wood and Guillemont during the opening two months of the Battle of the Somme. On 13 November 1916, they were involved in an attack on a German strongpoint south of Serre called the Quadrilateral.

In 1917, the battalion suffered heavy casualties during fighting at Oppy Wood and Cambrai before it was eventually disbanded in February 1918 due to manpower shortages in the British Army. After spending three months with the 23rd Middlesex (2nd Football) Bowler was transferred to the 18th London Regiment (45843 then 602445) on 17 June 1918, who he would serve with until demobilisation in 1919.