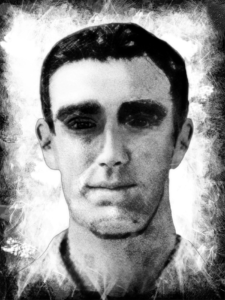 George Harold Brooks (1887-1918) was born in Radcliffe in 1887 and died on 8 November 1918 in northern France. Most comfortable operating at wing-half, Brooks played almost 40 games at three English Football League clubs before the First World War, during which he served in the British Army and was killed just days before the armistice.

Brooks made his senior debut for Manchester City in a 1-1 home draw against Aston Villa on 18 February 1910 but would find further opportunities difficult to come by. After making just two more first-team appearances, scoring one goal, Brooks left Hyde Road in March 1910 to join Bury. He would continue to find playing time difficult to come by, however, and would play just two first-team matches for the shakers before moving on again  – this time to North Eastern League side, South Shields.

In 1914, Brooks was signed by Derby County and would subsequently go on to enjoy the most productive season of his entire career.  In a season that saw County finish top of the Football League Second Division, Brooks playing 33 league and one FA Cup game. His final competitive first-team appearances came in a 2-0 home victory over Preston North End on 24 April 1915.

Private 204239 Brooks enlisted in the York and Lancaster Regiment during the First World War and was posted to the 2nd/4th (Hallamshire) Battalion. By late 1918, Brooks had been appointed lance corporal and was in lines around the French and Belgian border south of Mons. Brooks was subsequently wounded in the final weeks of the war and died at 5th Casualty Clearing Station on 8 November 1918. He is buried at Maubeuge (Sous-le-Bois) Cemetery.