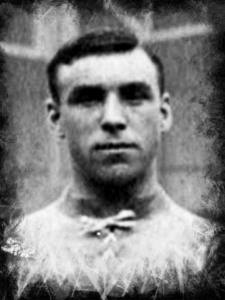 George Draycott (1887-1918) was born in Newhall, Derbyshire on 1 December 1887 and died in France on 18 September 1918. Seemingly destined for a life of toil down the mines, football offered Draycott an escape from poverty. He was on the verge of first team football at Bradford City when the First World War broke out. Having enlisted in the British Army, Draycott was to lose his life just weeks before the armistice.

Draycott was born into a Derbyshire mining family on 1 December 1887 at Newhall, near Burton-on-Trent. A sobering illustration of the hardships of the times was that his mother Charlotte ‘made her mark’ on the birth certificate in the shape of a scrawled cross.

She was illiterate and unable to sign her name. By the age of thirteen, with his father dead, Draycott was employed as a colliery horse driver. Fortunately, the world of football offered hope of a brighter future.

A central defender, he played for Newhall Swifts. He then joined Gresley Rovers, where, for reasons unknown, he attracted the nickname ‘Kibby’. In March 1913 Draycott was part of a triple transfer from Gresley Rovers to Bradford City. Along with Charlie Storer and Solomon Tremelling, Draycott moved north for the then substantial sum of £150.

All three players made their City debuts on 6 March 1913; when City played a benefit game against a Steve Bloomers XI at Leicester Fosse. The game was played for Leicester’s long serving secretary George Johnson. Around 4,000 witnessed the game which City won 2-0, Tremelling and Oscar Fox were the scorers. The Steve Bloomers XI was made up from teams of the East Midlands, with the bulk from Leicester. Draycott was a reserve at Valley Parade and had yet to break into the first team when war broke out in August 1914.

Private 52364 Draycott had initially enlisted into the Leicestershire Regiment but by 1918, he had transferred to the 7th (Service) Battalion of the Lincolnshire Regiment. On 18 September 1918, Pte Draycott was involved in heavy fighting during the Battle of Epehy, where the 7th Lincolns were part of 51st Brigade, 17th (Northern Division). The 30-year-old would die later that day. Draycott was subsequently buried at the small Gauche Wood Cemetery near Villers-Guislain, where he is one of just 48 burials.