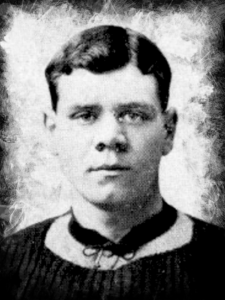 George Charles Hunter (1886-1934?) was born in Peshawar, India on 16 August 1886 and is believed to have died in 1934. Nicknamed “Cocky”, Hunter was a powerful wing-half whose fiery temperament led to a number of controversial incidents during both his football career and personal life. Hunter, a pre-war soldier, played more than 200 games for six clubs either side of World War One, during which he rejoined the British Army to serve with the Royal Sussex Regiment.

Private 7444 Hunter joined the Royal West Kent Regiment in Maidstone on 23 December 1903, aged 18 years 3 months. After undergoing training, Pte Hunter was posted overseas to Malta on 6 April 1904 and was appointed lance corporal on 7 February 1906. Three months later, however, Hunter resigned his stripe at his own request. It is not clear why he chose to do so, but on 9 May, Hunter was permitted to extended his service with the colours to nine years.

Hunter would not complete this extended service, however, as he was arrested and subsequently found guilty of theft and receiving stolen goods at a District Courts Martial on 14 December 1906. After serving 140 days hard labour, Hunter was discharged from the army for misconduct at Dover on 2 May 1907.

Having previously played for Isthmian League side, Maidstone, Hunter joined Croydon Common in 1907 and went on to play 39 games in all competitions for the Southern League outfit, scoring one goal. A move to Aston Villa followed in 1908, where Hunter made his debut on 12 September in a 2-1 victory at Nottingham Forest. He then helped Villa to the First Division title during the 1909/10 season, scoring once in 35 league and cup games. The following campaign proved to be the most productive of Hunter’s career and he would play 35 games in all competitions as Villa came second behind eventual champions, Manchester United.

Hunter would then play 11 games for Villa in the 1911/12 season, before Oldham Athletic persuaded him to move to Greater Manchester on 1 January 1912. After  making his debut against Preston North End five days later, Hunter played 16 further games as his new club finished in a lowly 18th position. The 1912/13 season proved to be Hunter’s last at Boundary Park and after playing another 27 games, he left Oldham to join Chelsea in March 1913. Nineteen games into the 1913/14 campaign, Hunter was on the move again as Manchester United paid £1300 to take him back to the north-west. After making his debut on 14 March 1914 in a 6-0 victory of former club, Aston Villa, Hunter played six further games as United finished 14th in the table.

The 1914/15 season saw Hunter appointed United captain after the wing-half had establishing himself as first choice at Old Trafford. After 14 appearances before Christmas, however, Hunter was suspended indefinitely by club bosses in January 1915 for a breach of training ground regulations. It was just one of a number of disciplinary problems to hit Hunter during his career and he would play no further games for Manchester United.

During the First World War, Hunter played as a guest for former club Croydon Common, as well as also turning out for Southampton, Brentford and Birmingham. On August 1919, Hunter joined Southern League side Portsmouth and would play eight matches before he was permanently suspended by the Football Association for his involvement in a plot to fix the result of a match between Portsmouth and Bristol Rovers on 4 October 1919.

Having been discharged from the army for misconduct in 1907, it is unsurprising that Hunter made no mention of previous service when joining up again during World War One.  After reportedly spending several months on an armoured cruiser, Private G/7950 Hunter enlisted in the Royal Sussex Regiment at Woolwich on 30 September 1915 and was subsequently posted to 10th (Reserve) Battalion at Shoreham. Hunter was then appointed lance corporal on 4 November before being promoted to corporal on 1 February 1916. His rapid rise continued and on 22 June, he was appointed acting sergeant.

After spending 11 days at 5th Northern General Hospital in Leicestershire suffering from dysentery, Hunter was sent to France in August 1916 and joined 9th (Service) Battalion, which had been on the Western Front since September 1915. After just five weeks, Hunter was again struck down by dysentery and was sent to the 24th General Hospital at Etaples, via Amiens and Abbeville, on 17 September 1916. He was then evacuated back to Britain on 7 October.

On 15 January 1917, Hunter was posted to 3rd (Reserve) Battalion at Newhaven, where he remained until 14 August 1917. He then returned to Shoreham to rejoin 10th (Reserve) Battalion – by that time known as 23rd Training Reserve (TR) Battalion. In February 1918, Hunter was posted to Aldershot as an instructor in the gymnastic staff, before being re-posted in the same role to Number 11 Officer Cadet Battalion at Pirbright, Surrey on 29 October 1918. On 8 February 1919, he was eventually demobilised and transferred to Class “Z” of the Army Reserve.

After retiring from football, Hunter found work as a sports writer but endured a difficult personal life. In February 1922, Hunter appeared before Manchester Police Court after an incident at the Concert Artists Club, in which Hunter was alleged to have assaulted a member of staff and damaged a telephone and picture. Found guilty, he was ordered to pay damages of £4 10s and was fined 40s for the assault and 10s for being drunk and disorderly.

Unfortunately, it was not the last of Hunter’s misdemeanors. Just three weeks later, he was arrested and subsequently charged with the theft of two diamond rings in Swansea, South Wales. Hunter then appeared before Woolwich Magistrates Court on 28 August 1930, charged with “running away and leaving his wife and children chargeable to the Woolwich Union” on a warrant issued ten years previous. It was revealed that Hunter had got into trouble with his employer and was out of work, subsequently leaving his family in Portsmouth. Hunter’s wife is quoted as saying: “This is the first time I have seen my husband in eleven years. He was a drunkard and a gambler. I was only seventeen when I married him.”

Hunter pleaded guilty “under provocation” but said he had been given to understand that his wife was “doing well”. The court heard that it had cost the ratepayers £856 for the maintenance of his wife and children, which Hunter claimed he would repay in installments of £10 or £15 a month if given a chance. The Magistrate (Mr Campion) sentenced Hunter to three months hard labour.

It has been reported that George Hunter died in 1934, however, no definitive evidence has be found as of yet.

Additional information provided by Denise Jackson and Chris Pennycook at the Pompey Pals Project, and Jim Grundy.
A full list of sources used to create this page can be found here.