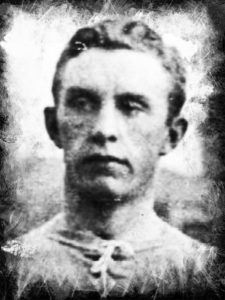 George William Kennedy DCM, MM (1882-1917) was born in the Scottish market town of Dumfries on 12 March 1882 and died in Belgium on 16 November 1917. A wing-half, Kennedy played for clubs in both Scottish and English football before emigrating to Canada in 1914. During the First World War, Kennedy joined the Canadian Infantry and would lose his life at the Third Battle of Ypres in 1917.

Kennedy began his football career at Maxwelltown Volunteers before moving to English side Lincoln City in 1906. After playing 45 league and cup games for Lincoln, Williams joined Chelsea and would go on to make 12 appearances for the London club.

In 1910, Kennedy left Stamford Bridge and made the short trip west to sign for Southern League side Brentford, where he would spend the following three seasons. He subsequently returned to Scotland in 1913 and would spend time at Dumfries. Kennedy emigrated to Canada in June 1914.

Private 418239 Kennedy enlisted in 42nd Battalion (Royal Highland Regiment), Canadian Infantry in March 1915 and was sent to France with the Canadian Expeditionary Force (CEF), where he would win both the Military Medal (MM) and Distinguished Conduct Medal (DCM) for gallantry. Having risen to the rank of company sergeant major (CSM), Kennedy was seriously wounded during the Third Battle of Ypres and subsequently died from his injuries on 16 November 1917. He is buried at Lijssenthoek Military Cemetery, located 12km west of Ypres.