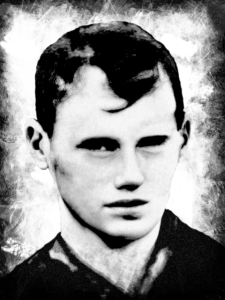 George Andrew Lake (1889-1918) was born in Eastham, Wirral between April and June 1889 and died in northern France on 6 November 1918. A former reserve team player at Manchester City, Lake made one senior appearance for Chelsea before his career was brought to a premature end by the First World War. Having subsequently enlisted in the British Army, Lake would serve on the Western Front before losing his life just one week before the Armistice. Lake is the great-uncle of former Manchester City midfielder, Paul Lake.

Wirall-born Lake began his career as an amateur at Manchester City before signing professional terms in April 1913. Despite establishing himself as a reserve team regular, Lake would struggle to break into the senior side at Hyde Road and left the club in the summer of 1913.

Having subsequently impressed during a trial at Chelsea, Lake signed for the London side in September 1913 and soon became a regular fixture in the reserves.  On 14 April 1914, he was handed his first team debut when he was drafted in to replace the injured Sam Downing in a 3-1 loss at West Bromwich Albion.

Lake would find further senior opportunities difficult to come by at Stamford Bridgeand remained in the second string during the 1914/15 campaign. On 12 November 1914, he took part in a fundraising match between Chelsea and a Grenadier Guards XI at Stamford Bridge, however, he would play no further competitive games for the senior side and returned to Manchester to join up at the end of the season.

Private 56637 Lake enlisted in the Army in mid-1915 and was posted to the 66th (2nd East Lancashire) Divisional Cyclist Company. The unit was destined to remain in Britain throughout the war and Lake was transferred to the 2/4th Battalion of the Hampshire Regiment and later posted overseas. The battalion had been sent to India soon after the declaration of war before moving to Egypt in May 1917 to join 233rd Brigade, 75th Division. In June 1918, it moved to France and was attached to 186th Brigade, 62nd (2nd West Riding) Division.

The 2/4th Hampshires would subsequently take part in the Hundred Days Offensive which saw the Allies push German forces back across ground that had been lost since March 1918. They were then among the troops tasked with crossing the Sambre Canal near the village of Frasnoy on 4 November 1918. It was during this action that Lake would sustain the wounds that would ultimately cost him his life two days later. Following his death on 6 November 1918, Lake’s brother (George) received a letter of condolences from Chelsea manager David Calderhead, it read:

Dear sir, I am in receipt of your note recording the Death of your brother George. All the people at Chelsea beg to express to you and your family there [sic] very sincere sympathy in your great sorrow, he was very greatly respected by both Players and Officials of the Club and we were in the hope that after the War he would again played [sic] for us. He is the only Chelsea player who has fallen. I again beg to express our Sympathy. Yours faithfully, D. Calderhead.