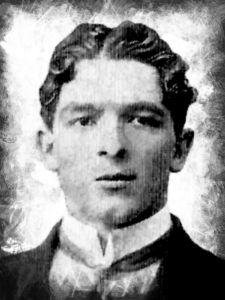 George Edward Travers (1888-1946) was born in Newtown, Birmingham in 1888 and died in Smethwick on 31 August 1946. A talented inside-forward, Travers played more than 190 games during a career that saw him feature for eight clubs and also won the FA Cup in 1912 with Barnsley. Travers served overseas with the British Army during the First World War, after which he resumed his playing career before finally retiring from the game in his forties.

Travers began his football career at Bilston United in 1904, before moving to Rowley United in 1905. Short spells at Wolverhampton Wanderers, Birmingham, Aston Villa, Queens’ Park Rangers and Leicester Fosse followed, before Travers signed for Second Division side Barnsley mid-way through the 1910/11 season.

In Travers’ first full season at Oakwell, he played in 22 league and 12 cup games, scoring five times, and was part of the side that beat West Bromwich Albion at the second time of asking in the 1912 FA Cup Final. During the 1912/13 campaign, Travers scored 10 goals in 34 league games, helping Barnsley to a fourth-placed finish in the Second Division. He also played three times in the FA Cup, before his side were eliminated.

The 1913/14 season saw Travers play 23 matches, scoring 10 goals, for Barnsley before Manchester United persuaded him to move across the Pennines to Old Trafford in February 1914. Travers would make his United debut on 7 February in a 2-1 loss at Tottenham Hotspur, before going on to play 12 further games that season. He also scored five goals.

Travers would establish himself as one of United’s first-choice inside-forwards in the opening weeks of the 1914/15 season, before he decided to offer his services to the Army in September 1914. Travers would then make four more appearances for United before Christmas, but would play just one further game that season – a 0-0 draw at West Bromwich Albion on 20 February 1920. Travers would then make a number of wartime “guest” appearances for Tottenham and also captained his unit side in the Army.

Following the First World War, Travers was released by Manchester United on a free transfer and subsequently had short spell at Millwall before signing for Third Division South side Norwich City in October 1920. After scoring 14 goals in 29 games, Travers moved again at the end of the 1920/21 season, this time to Gillingham. Short spells at amatuer sides Nuneaton Town and Cradle St Luke’s followed, before Travers finally returned to the club where he began his career, Bilston United, to eventually retire in 2931, aged 43.

Private M2/120111 Travers enlisted in the Army Service Corps (ASC) on 2 September 1915 in Preston, Lancashire. He was then sent to the ASC Mechanical Transport Depot at Grove Park, London, and subsequently began training.  After spending time at Catford, Pte Travers sailed to France on the SS Donegal on 28 February 1917, arriving at Le Havre the following day. He was then transported south to Marseille.

On 10 March 1917, Travers left Marseille onboard the SS Megantic and sailed to east across to Salonika, arriving there seven days later whre he joined 4th ASC Base Depot at Kalamaria. He was to remain in Salonika for the remainder of the war and did not leave until 29 March 1919. He was then transferred to Class “Z” Army Reserve and subsequently demobilised from the British Army to resume his career in professional football.