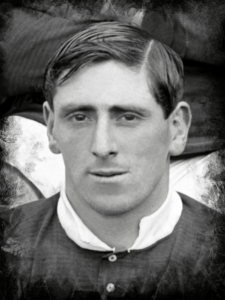 George Wall (1885-1962) was born on 20 February 1885 in Boldon Colliery, County Durham and died in June 1962 in Manchester. A fast and skillful outside-left, Wall played almost five hundred games in a 19-year career that also saw him win five international caps for England. During the First World War, Wall served on the Western Front with the British Army and had a younger brother who played for the United reserve team.

Wall began his football career at local junior side Boldon Royal Rovers before joining Whitburn in 1901 and then Jarrow in September 1903. Just two months later, Second Division Barnsley took Wall to South Yorkshire, where he would go on to play 82 games in all competitions, scoring 25 goals.

After three seasons at Oakwell, Wall moved to Manchester United for a fee of £175 and made a scoring debut on 7 April 1906 in a 1-0 triumph over Clapton Orient. Wall would go straight into Ernest Mangnall’s side and played a key role in United’s subsequent promotion to the English top fight as they dropped just one point from the six games Wall took part in.

Wall’s second season in Manchester saw him consolidate his place in the starting XI and he would play every game as United eventually finished eighth in the First Division. On 27 March 1907, Wall made the first of seven international appearances for England in a 1-1 draw with Wales at Craven Cottage, London. He would win his final cap in a 2-1 loss to Ireland in 1913.

The 1907/08 campaign saw United clinch their first ever league title after finishing nine points clear of both second placed Aston Villa and Manchester City, who finished third. The season would prove to be one of the most productive of Wall’s career as he struck a career-best 22 goals in 40 league and cup games. The following season saw a disappointing mid-table finish for United, but this was negated somewhat by their 1-0 triumph over Bristol City in the FA Cup Final at Crystal Palace.

After a fifth-placed finish in the 1908/09 season, United stormed to their second title in three seasons in 1909/10 with Wall scoring five times in 26 games. It would prove to be the last silverware of Wall’s career and by the time official competition was suspended for the duration of the war in 1915, Wall had played 316 league and cup games for Manchester United, scoring 98 goals.

Wall resumed his football career following the end of the First World War and joined Oldham Athletic for a fee of £200 ahead of the 1919/20 season. In two years at Boundary Park, he played 72 league and cup games and scored 12 times. He then spent one season at Scottish side Hamilton Academical before moving back to English football in June 1922 to join Rochdale of the Third Division North.  Wall would eventually call time on his professional at the end of the 1922/23 season, after a career that saw him play more than five hundred league and cup games.

After retiring from the professional game, Wall had spells at Cheshire County League side Ashton National and finally Manchester Ship Canal, where he worked on the docks at Salford Quays. He died in Manchester in 1962 aged 77.

Wall enlisted in the Black Watch (Royal Highlanders) in June or July 1915 and was posted to the 11th (Reserve) Battalion in Tain, Scotland for basic training. In October 1915, the battalion moved to Catterick, Yorkshire and four weeks later, Wall is reported to have returned to Manchester on recruiting business. During this period, Wall featured for Manchester United as a wartime guest. The battalion moved back to Scotland in March 1916 where they were based at Dunfermline.

On 1 September 1916, the 11th (Reserve) Bn became 38th Training Reserve Battalion of 9th Reserve Brigade. Wall’s subsequent service is unknown and it is unclear whether he served abroad. A lack of medal index card for a George Wall in the Black Watch suggests he remained on home soil for the duration of the war, however, it may be possible that he was posted to another regiment.