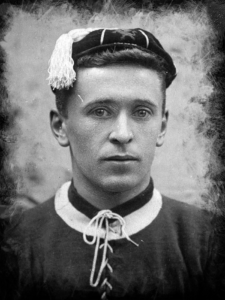 George Arthur Wynn (1886-1966) was born in the Shropshire border village of Trefonen on 14 October 1886 and died in Abergele, Denbighshire on 28 October 1966 aged 80. A gifted inside-forward, Wynn played more than 150 club games in a career than spanned more than 10 seasons and was also capped 12 times by Wales. He enjoyed his most productive years of football at Manchester City before the First World War, during which time he served as a soldier in the British Army.

A former telegram messenger, George Wynn worked as a carpenter on the estate of Lord Harlech before playing amateur football for Oswestry United, who he helped win the 1906/07 Welsh Cup after scoring in a 2-0 triumph over Whitchurch at Wrexham’s Racecourse Ground. Soon after, Wynn moved to Combination side Wrexham, where he impressed enough to earn the first of 12 caps for Wales after making his international debut in a 3-2 win over Scotland on 1 March 1909.

Two months later, Manchester City paid Wrexham £250 to take Wynn to Hyde Road, where he made his debut in a 2-0 defeat at Bradford Park Avenue on 25 December 1909. Wynn subsequently struck 10 league goals in his first season at City, helping them to the Second Division title, and also scored twice in four FA Cup games.

In his second season in Manchester, Wynn topped City’s scoring charts with nine league goals in 20 games, before racking up 18 goals during the 1911/12 campaign – the most prolific of his career. Wynn was the club’s top scorer again in 1912/13, this time scoring 16 times in 33 league and cup games, but would score only once in eight games during the following season.

Wynn made just one appearance during the 1914/15 season, a 4-1 loss at Villa Park on 21 April 1915, but would score nine times in 30 wartime games for the club. He would return to Hyde Road after the war, but was allowed to leave in September 1919 after making just four further appearances for the club, scoring once.

Soon after,  Wynn joined Second Division side Coventry City for £300, making his debut in a goalless draw against Blackpool at Highfield Road on 22 November 1919. The 33-year-old would struggle to replicate his pre-war form at Coventry, however, scoring just three goals in 26 games before leaving the club after less than two seasons. A brief spell at Halifax Town followed, before Wynn finally finished his playing career at Cheshire League side, Mossley, where he scored 25 goals in 61 games. He died near the Welsh town of Abergele 0n 28 October 1966 aged 80.

Private 205527 Wynn joined the 2/5th Battalion of the Lancashire Fusiliers during the First World War but would later transfer to the 8th Lincolnshire Regiment (Service No. 42701). Wynn was to serve on the Western Front and would also play divisional football on a number of occasions. On 16 April 1918, the Liverpool Echo published a letter from the Welshman, which read:

Thanks very much for offering to send a paper. I would prefer the “Liverpool Football Echo.” I met Charlie Griffiths (who played outside left for Oswestry); he was in our camp for about a week, and played in a couple of matches for our division. We won both matches. I have had a few games here, and have managed to score one or more in each, five being the most. I’m playing centre-forward for our division. I don’t suppose you see many games where you are. If you happen to know a Mr. Penry Jones where you are give him my kind regards. He was a member of the Welsh Football Association when I played, and is a good sport.

On 3 September 1918, the same newspaper reported that Wynn had been shot in the left leg and had received further wounds following shell burst. One week later, it published a letter from Wynn, which read:

The commencement of the football season recalls different personalities, and as I have always followed up your paper in sport. I hope you have another successful season. I have been finishing what should have been the close season up in a Northern hospital, though in a different way than other times. Still, I was far luckier than some of my pals, so I mustn’t grumble. A shell burst amongst a dozen of us, killing three or four and wounding the rest. I had a bullet through the left knee and a couple of shell wounds just below the calf, but they are not serious; and I hope to be as fit as ever again shortly, and hope to play against Liverpool – AND BEAT THEM. We had some good games in France, and our were in the final for the Divisional Cup, which was expected to be played this last couple of months, for which there were two sets of medals. There is great interest taken in these matches and I was looking forward very much for one of those medals; but a bigger match came off, with the result that I got bowled over. It was no use protesting, so I GOT CARRIED OFF THE FIELD. All the best to all friends.

Following the armistice, Wynn returned to Britain and was to resume his career in professional football after finally being demobilised in 1919.

Additional information provided by Suzanne Jones and the Welsh Football Association.
A full list of sources used to create this page can be found here.