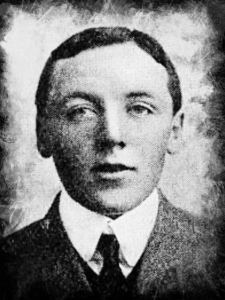 Gerald Kirk (1883-1915) was born in Leeds, West Yorkshire on 14 July 1883 and died in Belgium on 24 April 1915. The son of a wealthy land-owning family, Kirk was an amateur footballer who played 43 times for Bradford City and seven  for Leeds City before turning his back on the game aged just 25. Having joined the British Army as a private in the opening weeks of the First World War, Kirk rose through the ranks and was serving as a second lieutenant when he died of wounds  near Ypres in 1915.

Kirk was born in the Leeds suburb of Headingley,  the son of Alfred and Isabella of Greenwood Leghe, Ingleton, North Yorkshire. From 1895 he attended, as a boarder, Pocklington Grammar School, East Yorkshire, where he played for the second XI at both football and cricket. He appeared at centre forward and inside left. He left the school in December 1900. Kirk’s family owned a great deal of property and land in the Ingleton area, presumably after leaving school he helped to manage the estate. In the 1901 census, the family are classed as ‘living on their own means’.

A keen sportsman, Kirk captained Ingleton Football Club. In April 1903 they won the Lancaster and District League Championship, the whole village wildly celebrated as the team returned home to a heroes welcome. The following season they were beaten finalists in the Lancaster Senior Cup. Kirk joined Bradford City after impressing as a trialist in a friendly against Dundee on 25 April 1905 and again in a friendly against Blackburn Rovers. He made his first team debut on 28 October 1905, when City defeated Blackpool 2-1 in a Second Division game at Valley Parade, and soon established himself as a virtual ever-present at centre-half.

However, Kirk was transferred to Leeds City in December 1906. At Elland Road he only played seven games – scoring one goal – before returning to Valley Parade in September 1907. Back at Bradford City he was mainly a reserve, playing a mere three games during the 1907/08 season. City’s promotion to the top flight of English football brought about fairly widespread changes in personnel and Gerald was one of many who left Valley Parade during the summer of 1908. In all, Kirk had played 43 games for City, scoring twice.

Although Kirk was only approaching his 26th birthday, he turned his back on ‘professional’ football and returned to his old club Ingleton. Off the field of play Kirk was instrumental in forming Ingleton Conservative Club and was its first Honourable Secretary. Clearly an active citizen, he was also on the board of the Ingleton National School. In line with his social standing he regularly hunted with the Vale of Lune Harriers. He married Sarah Jane Capstick at Holy Trinity Church, Casterton, Westmorland on 21 April 1909. They set up home at Hazel Mount, Warton near Carnforth.

Private 2132 Kirk enlisted in 1/5th Battalion of the King’s Own Lancaster Regiment on 1 September 1914, having answered an newspaper appeal calling for new recruits to replace the 200 territorial soldiers that had been declared unfit for service. The newspaper would subsequently call the men the Gallant 200. Kirk was quickly marked out for promotion and was duly appointed lance corporal on 31 October 1914. The battalion were initially involved in home defence duties around Lancaster and Barrow. From 14 August 1914 the battalion was used to guard the Great Western Railway line between Didcot and Oxford.

In November 1914 they left Didcot for Sevenoaks in Kent, where they combined with other troops from the Territorial West Lancashire Division. During that time Kirk was offered a commission and eventually attained the rank of second lieutenant on 31 January 1915. In February 1915, Kirk sailed for France with his unit and by the 17 February, the first elements had begun disembarking at Le Havre. They were one of the first Territorial units to be sent overseas.

On 2 March 1915, the battalion were at Bailleul, prior to gaining their first experience of trench warfare at Neuve Eglise. They were relived on 23 March by the 1st Monmouthshire’s and slowly marched away from the tumult of the front line for a period of well-earned rest in billets. All too soon, they moved to the infamous Ypres Salient and on 12 April 1915 the battalion were in the front line trenches at Polygon Wood. In just five days they lost 14 men killed and 44 wounded. The badly battered subsequently moved to St Jean and dug in as Ypres suffered from yet another spell of heavy shelling.

On the afternoon of 22 April 1915, the German’s launched the first gas attack in the history of warfare, at nearby St Julien. It descended on a portion of front held by French Colonial troops. Terrified by the strange yellow cloud enveloping them, the ‘Zouaves’ retreated in disarray. Kirk’s  watched as the troops passed through their ranks. A Canadian Division somehow plugged the gap and checked the ensuing German advance.

The following day Kirk’s platoon was ordered to support the Canadians, as part of a hastily assembled counter attack. At 1300 they moved forward towards Pilkem and once again dug in. The attack commenced at 1545 and at 1700 the battalion, acting as reserve, joined the fray. With ‘C’ company leading they immediately came under heavy machine gun and rifle fire from three sides.

Suffering numerous casualties they pulled back a couple of hundred yards. With no artillery support their position was almost hopeless. The colonel in charge witnessed soldiers trying to find cover wherever they could, some hid behind a pile of manure, but the bullets cut through and they were all killed. The colonel made his way to brigade headquarters but was simply told to ‘hold his position’. When he returned he found that ‘Kirk is seriously wounded’.

The desperate assault blunted the German attack, but at great cost. Over half the troops involved were killed. The Battalion alone lost 26 men killed, 102 wounded and one gassed. Kirk, leading his platoon forward at Wieltje, was shot through the chest. Badly wounded, he was taken to Poperinghe behind the lines. He died the next day at Number 3 Casualty Clearing Station, Poperinghe and is buried at Poperinghe Old Military Cemetery.

Reproduced with kind permission from David Pendleton and the Bradford City FC Museum
A full list of sources used to create this page can be found here.