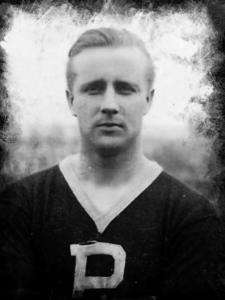 Harold Pemberton Brittan (1894-1964) was born in Derby on 14 December 1893 and died in Philadelphia on 3 May 1959. A centre-forward who spent three seasons at Chelsea, Brittan’s career was cut short by the onset of World War One during which he served overseas with the British Army. After finding opportunities difficult to come by following the Armistice, Brittan left Stamford Bridge to become one of the first Englishmen to play in the United States.

Brittan began his football career at Derbyshire side Ilkeston United before joining Chelsea in December 1913. Handed his Blues debut on 18 April 1914 in a 2-0 defeat at Sunderland, Brittan was subsequently picked to play against Everton seven days later and scored twice in a 2-0 victory at Stamford Bridge. During the 1914/15 season, Brittan played five times for Chelsea before New Year, but failed to score on each occasion. He would then make four further appearances during the second half of the season and scored on two occasions.

After joining the British Army during World War One, Brittan returned to Stamford Bridge after demobilization but would struggle to establish himself. After playing just 15 games games during the 1919/20 season, including two on loan at Leicester Fosse, Brittan left Chelsea and joined American side Bethlehem Steel, then in the National Association Foot Ball League (NAFBL).

Brittan would score 14 goals in 11 matches during the 1920/21 season, after which the owners of Bethlehem Steel moved to club to Philadelphia where they competed in the inaugural season of the American Soccer League (ASL) under the name of Philadelphia Field Club. After then netting 27 times in 17 games, Brittan left Philadelphia in 1922 and joined Fall River Marksmen as player-coach.

His time at Fall River proved to be the most successful of his entire career and he would score 87 goals in 77 games, winning three ASL titles and one National Challenge Cup. Brittan was then released by Fall River in August 1926 and was signed by New Bedford Whalers, who also employed him in player-coach role. Brittan’s time at the Whalers proved short-lived, however, and he took the decision to retire from the game when the club sold his contract to Providence Clam Diggers.

In early 1927, Brittan decided to resume his playing career and returned to Fall River Marksmen where he struck 16 times in 24 games. The 1927/28 campaign proved to be the last of Brittan’s career and he retired from the game soon after. After hanging up his boots, Brittan pursued his business interests and in 1931 led a group of businessmen who bought Providence Gold Bugs and moved them to Fall River to play under the name, Fall River Football Club. The venture was to prove short-lived, however, and the club folded just must later leaving Brittan to finally retire from all football-related business. In 1951, Brittan was inducted into the National Soccer Hall of Fame in Oneonta and died 13 years later in New York.

Brittan joined the Army Service Corps during the First World War and was as acting-corporal (M2/1134118) at the time of his discharge.