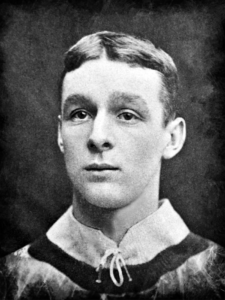 Joseph Henry “Harry” Hampton (1885-1963) was born in Wellington, Shropshire on 21 April 1885 and died in Rhyl, North Wales on 15 March 1963. A prolific goal-scorer, Hampton made over 300 appearances for Aston Villa before going on to play for Birmingham, Newport County and Wellington Town. During the First World War, Hampton served in the British Army before resuming his football career following the Armistice. He remains Aston Villa’s all-time leading league goal-scorer.

“Happy Harry” began his playing career as a junior with Lilleshall Iron Works before joining Wellington Town in 1902. The talented forward soon caught the attention of scouts from Aston Villa and signed professional terms with the Birmingham outfit in 1904, reportedly for a fee of £120.

Hampton made an immediate impact at Villa and scored 22 goals during an impressive first season at the club. He then went on to score both goals in Villa’s 1905 FA Cup Final triumph over Newcastle United and later helped them to the 1909/10 First Division title.

Hampton continued his prolific form throughout his Villa career and eventually struck 215 times in 341 games. In 1911/12, he finished as the joint top scorer in the country. Despite this impressive goal-scoring record, Hampton was only ever capped four times by England but did manage to score two goals in games against both Wales and Scotland.

After the war, Hampton returned to Villa Park but made no more appearances and soon moved to neighbours Birmingham, where he notched 31 goals in 57 games. He then enjoyed short spells at Newport County and finally Wellington Town, before finally hanging up his playing boots in 1925. In retirement Hampton worked briefly as a coach at Preston North End and former club Birmingham, before moving to Rhyl in North Wales where he ran the Carlton Cafe until his death in 1963.

Private 240914 Hampton initially joined the East Surrey Regiment in late 1915 before transferring to the Royal Army Medical Corps (RAMC) after a brief stay in the Royal Fusiliers (Service No. 229667). By Early 1916, Pte 508656 Hampton was based in Aldershot, Hampshire and was already playing army football. In April, Hampton captained an RAMC (Aldershot) side in two matches against a Birmingham team made up of wartime guests at St. Andrew’s, who he would also turn out for himself a number of times during this period.

Hampton subsequently spent time in Lancashire, where he guested for Blackpool FC and scored four goals in one match against Oldham Athletic. He then turned out for a British Army XI against a team of Belgian soldiers at Villa Park on Saturday 24 April 1917, before being posted overseas. Two months later, it was reported that Hampton had scored twice during a match “somewhere in France”, helping his side to a 5-2 victory.

In July 1917, news began to circulate that Hampton had “met with a severe accident in France” and was in a base hospital ‘with a fractured left thigh.’ The reports soon proved to be incorrect, however, and the Birmingham Daily Mail publishing the following article on 4 August 1917:

Happily, there is not the slightest foundation for this rumour… In a letter addressed to me and dated July 27, Hampton says that he is as fit and well as ever he was; and he goes on: “Pleased to say we are getting a bit of sport out here; not much football now, but cricket. We have played five matches and won four of them… Pleased to say I have found some good friends since I left ‘Blighty’. I have had three footballs sent out to me, and I might say they have been well used.” Everyone will, I am sure, be glad to know that Hampton is going on so well and making the best of things out there, and the hope will be general that the time is not far distant when we shall see him in the old familiar colours leading the Villa forwards to attack.

By December 1917, Hampton was on active service and based at a hospital near GHQ in France. He would remain overseas for the remainder of the war, during which time he become a casualty of a German mustard gas attack. Having subsequently returned to Britain, Hampton was discharged from the Army on 14 July 1919 under Para. 392 (xvi) King’s Regulations Para. 2 (a) (1) and was issued a Silver War Badge (No.B345961) on 18 December 1919.