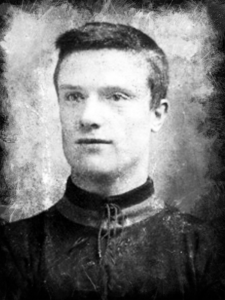 Harry Potter (1884-1918) was born on 24 November 1884 in Bradford, West Yorkshire and died in France on 22 March 1918. A reserve half-back at Bradford City and Lincoln City, Potter was a part-time player who also worked as a dyers labourer. During the First World War, he joined the British Army and would subsequently lose his life during the German Spring Offensive of 1918.

A regular with Bradford City reserves, Potter was part on the side that defeated Heckmondwike 1-0 in the West Riding Cup Final on 14 April 1906. Played in front of 1,500 spectators at Upper Armley, it was only the second trophy of any kind City had won at that time in their history.

Breaking into the first eleven of the rapidly emerging first team was a tall order for Potter, however, and he would decide to leave Valley Parade in 1910 to try his luck with Lincoln City. He would find things just as difficult at Sincil Bank and would make no appearances for the Lincoln first team. Throughout his time at the club, Potter kept his family home at 22 Agar Street, Bradford and was employed by the Fur Fabric Company of Carlisle Road.

Private 205175 Potter initially enlisted with the West Yorkshire Regiment in Bradford but was transferred to the 2/4th Battalion of the Lincolnshire Regiment on 16 April 1917, receiving the service number 235304. The battalion had been part of the advance on the Hindenburg Line and had suffered heavy casualties as a result. Pte Potter was one of the reinforcements needed to bring the back up to strength following the losses.

After a summer on the Somme, the battalion moved to the Ypres sector in August 1917. The following month they were involved in the Battle of Polygon Wood, during the Third Battle of Ypres, where they suffered very heavy casualties. The battalion was then withdrawn to Avion before moving into reserve at Flesquieres. On 30 November 1917, the Germans launched a major attack intending to regain ground lost during the Battle of Cambrai. The 2/4th Lincolns were thrust into the action at Bourlon Wood. On 30 January 1918, due to continuing casualties, the battalion was merged with the 1/4th Lincolns.

At 0500 on 21 March 1918, the enemy launched their final offensive of the First World War, when sixty-four divisions advanced on a 54 mile front. Potter’s  was in reserve between Mory and Vraucourt. As a huge barrage fell on the forward troops, the Lincolns could do little but wait for the inevitable call to arms. Remarkably, an impromptu football match is reported to have broken out until the battalion was ordered forward to mount a counter attack against the advancing Germans at 11am.

At what became known as the Battle of St. Quentin the Lincolns found themselves heavily outnumbered. They were forced into a gradual withdrawal to a line of trenches in front of the Vraucourt road. Remaining there throughout the afternoon, they fought off repeated attacks and it was an exhausted that was relieved that night. They had suffered 75% casualties and yet, outnumbered and often surrounded, they had held the line.

During the night of 21 March 1918, the battalion took up position to the north-west of Vraucourt. The following day followed a similar pattern to the previous day. Constant attacks saw the Germans pierce the right flank of the battalion during the afternoon. As one officer later remarked, they were ‘facing all ways’. By the evening they were under fire from front and rear.

At 1800 the battalion fell back onto a position east of Mory, covering Vraucourt. For ninety minutes they held out, until one final push from the enemy broke through. The Lincolns then moved to high ground covering the village of Mory. The fighting raged on into the night as the German advance was checked. The heroic action would come at a fearful cost however. Sometime during that tumultuous day of 22 March 1918, Harry Potter was killed.

The village of Mory was eventually abandoned as the enemy advance pressed forward once again. Despite its early success, the German advance was finally halted and would eventually be thrown back in a series of spectacular victories that took the Allies all the way to the German frontier. Due to the chaotic conditions during the days surrounding Potter’s death, his body was never found and his name is now among the 35,000 on the Memorial to the Missing at Faubourg-d’Amiens Cemetery, Arras. He left a widow and an eight-year-old daughter.