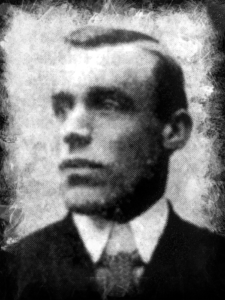 Horace Osborne Robotham (1879-1916) was born in Heath Town, near Wolverhampton in July 1879 and died in Northern France on 12 September 1916. A hard-working wing-half, Robotham played for a number of clubs before the First World War, during which he enlisted in the British Army. The 37-year-old would ultimately lose his life during the Battle of the Somme in 1916.

Robotham began his career playing amateur football, winning the West Yorkshire League and Cup with Hunslet, before joining Wolverhampton Wanderers in February 1901. After making his debut in a 2-1 defeat at Aston Villa on 23 November 1901, Robotham would play a further six senior games for Wolves before leaving the club to join Fulham in 1903.

Robotham soon established himself at Craven Cottage and was a regular during the 1903/04 season. The following season saw him lose his place in the side and he subsequently moved to Brentford where he would play 21 games. Robotham left London in 1906 to sign for Glossop and would play 21 league and one FA Cup games during the 1906/07 campaign. He then moved again in 1907, this time to New Brompton, and would finally finish his playing career after a brief spell at Wellington Town.

Private F/2397 Robotham enlisted in the 23rd (Service) Battalion of the Middlesex Regiment, better known the the 2nd Footballers’ Battalion, on 26 November 1915 and subsequently underwent training with his unit at Cranleigh. In November 1915, the battalion moved to Aldershot where it came under the command of 123rd Brigade, 41st Division.

After finally landing in France on 3 May 1916, the 23rd Middlesex concentrated between Hazebrouck and Bailleul before moving south to take part in the Battle of the Somme. Robotham was subsequently killed in action on 12 September 1916 during the subsidiary Battle of Flers-Courcelette. The 37-year-old’s body was never found and his name is now among the 72,195 listed on the Memorial to the Missing of the Somme at Thiepval.