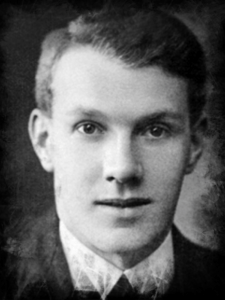 Henry Arthur Dobson (1893-1918) was born in Chesterton, Staffordshire on 1 April 1893 and died in northern France on 29 March 1918. A hard-working and athletic half-back, Dobson played just a handful of games for Aston Villa and spent the majority of his time in the reserves. After joining the British Army during the First World War, Dobson served on the Western Front and would ultimately lose his life in 1918.

Having began his career with local amateur clubs Chesterton Foresters and Audley North Staffs, Dobson signed for Aston Villa in August 1912. Despite being handed his debut in a 1-1 home draw against Blackburn Rovers on 15 February 1915, Dobson had to wait almost a year for his next opportunity – playing in a 2-2 draw at Bolton on 1 January 1915. Dobson would continue to find opportunities limited at Villa and would play just six further games for the club during the 1914/15 season, after which official competition was suspended. In 1917, Dobson made one appearance as a wartime guest for Rotherham County.

Dobson attested under Lord Derby’s Group Scheme on 11 December 1915 and was subsequently transferred into Section B Army Reserve. He was eventually mobilised on 26 February 1917 and underwent training in Britain. Posted to the Infantry Base Depot (IBD) at Calais on 14 January 1918, Private 203210 Dobson remained there for two weeks before joining the 1st Battalion of the North Staffordshire Regiment on 26 February 1918.

Less than four weeks later, Dobson was thrown into action with his battalion when the Germans launched their massive Spring Offensive on 21 March 1918. In just five hours, the enemy fired one million artillery shells and would take 21,000 prisoners on the first day of battle alone.  Having sustained substantial losses, the British were forced into a desperate retreat during which Dobson was wounded near St. Quentin and evacuated to the rear. He would die from his wounds on 29 March 1918 and was later buried at Premont British Cemetery.