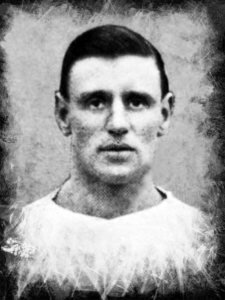 Horace Barnes (1891–1961) was born in Wadsley Bridge, Sheffield on 3 January 1891 and died in Clayton, Manchester on 12 September 1961. A prolific inside-forward, Barnes played local amateur football before joining Derby County in 1908. He would eventually go on to make 450 senior appearances for four different English clubs, including seven successful years at Manchester City either side of the First World War.

Barnes began his footballing career at local amateur club Wadsly Bridge before signing for English Second Division side Derby County as a 17-year-old in 1908. The youngster soon established himself as an integral part of Jimmy Methven’s side and helped them to the Second Division title in 1912.

In 1914 Manchester City paid a record £2500 to take Barnes to Hyde Road, where he soon replicated the form that had made him such as favourite at Derby. In his first season in Manchester Barnes scored 14 times in 29 matches, helping City to a fifth-placed finish before competition was suspended for the duration of the war.

In the first season after the war Barnes hit 23 goals in 40 games for City, forming a prolific partnership with  Tommy Browell who also scored 22 times. Over the next five seasons Barnes scored 88 goals in 165 matches, first under Ernest Mangnall and then David Ashworth.

On 25 August 1923 Barnes scored the first-ever goal at Maine Road in a 2-1 win over Sheffield United, while he had also scored the last-ever hat-trick at Hyde Road during a game against Cardiff City in December 1922.

In November 1924 Barnes was sold to Preston North End, where he would score 16 goals in 41 league and cup games. He was then allowed to move to Oldham Athletic mid-way through the 1925/26 season, where he struck 20 times in 46 matches before finally retiring from the game in 1928 after a brief spell with Ashton National.

Barnes played for his country once during his career, in a 1919 Victory International loss against Wales at Ninian Park, and also represented the Football League on two occasions. Following his retirement from football, Barnes worked at the Mather & Platt engineering factory in Manchester and died at his home in Clayton on 12 September 1961 aged 70.

During his lengthy career, Barnes scored 239 goals in 489 games in all competitions and is still regarded as one of the greatest players in the history of Manchester City Football Club.

Barnes was employed in munitions work during the early part of the First World War, before eventually serving in an anti-aircraft battery of the Royal Garrison Artillery (RGA) until the armistice in 1918. During his time at the munitions factory, Barnes was able to play 73 games for City in both the Lancashire Principal and Subsidiary competitions of the Wartime Football League when he struck an impressive 73 goals. In 1915 Barnes was fined by Manchester Magistrates Court after missing a work shift to play in a match against Southport Central.

Additional information provided by Mark Iddon.
A full list of sources used to create this page can be found here.