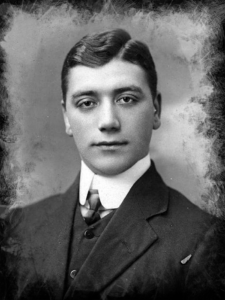 Joseph William “Jack” Windmill MC DCM (1881-1927) was born in Brierley Hill, West Midlands on 8 June 1881 and died in Kingswinford on 29 October 1927. A creative and intelligent half-back, Windmill spent six seasons at Aston Villa and also worked as a schoolteacher. During the First World War, Windmill served in the British Army and would win both the Military Cross and Distinguished Conduct Medal.

After starting his senior career at Birmingham Combination side Halesowen Town, Windmill joined Aston Villa in 1903 and made his debut in a 3-1 home victory over Newcastle United on 7 November 1903. Despite having to wait almost a year for his next opportunity, Windmill would become a first-team regular at Villa Park and was part of the side that beat Newcastle United 2-0 in the 1905 FA Cup Final.

Windmill played his final first-team game for Aston Villa in a 2-0 home win over Sunderland on 19 September 1908. He then retired from the game two years later after the local education committee complained that his football career interfered with his teaching duties. In total, the popular half-back had made 50 competitive senior appearances for Villa and scored one goal.

Private 16/896 Windmill enlisted in the 16th (Service) Battalion (3rd Birmingham) of the Royal Warwickshire Regiment in 1914. After training, the battalion joined 95th Brigade, 32nd Division on 26 June 1915 and finally left for France on 21 November 1915. It was then transferred to 15th Brigade, 5th Division on 26 December before moving into positions between St Laurent Blangy and Vimy Ridge in March 1916. They then moved south in July to take part in the Battle of the Somme.

Although not involved in the opening phase of the offensive, Windmill’s battalion would see action during subsidiary battles at High Wood, Guillemont, Flers-Courcelette, Morval and Le Transloy. They would then take part in the Battle of Arras in April and May 1917 during which Windmill, who by that stage had risen through the ranks to company sergeant major (CSM), was Mentioned In Dispatches (MID).

The 16th Warwicks saw further action during the Third Battle of Ypres, before being sent to the Italian front with 5th Division in January 1918. They were then recalled to France after the German Spring Offensive and were soon in action during the Battles of the Lys. It was during this period, on 17 April 1918, that Windmill would earn the Distinguished Conduct Medal (DCM). His citation was published in The London Gazette on 17 April 1918 and read: “For conspicuous gallantry and devotion to duty. He invariably displayed great courage and ability in operations when conditions were exceptionally bad, and set a splendid example of courage and determination.”

The 16th Warwicks were subsequently involved in almost continuous action during the remainder of 1918 and took part in the Battles of the Hindenburg Line and the Final Advance in Picardy. At the time of the armistice they were in the area of Le Quesnoy, France. On 1 January 1919, The London Gazette announced that Windmill had been awarded the  Military Cross (MC) as part of the King’s Birthday Honours.

Windmill subsequently returned to Britain and was finally demobilised and transferred to Class “Z” Army Reserve on 18 March 1919. After returning to teaching, Windmill was appointed headmaster of Brook Street School, Wordsley in 1922. He died in Kingswinford, West Midlands on 29 October 1927 aged just 46.