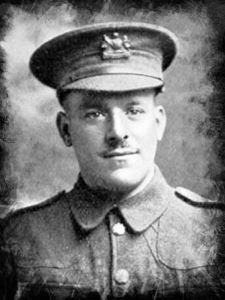 John George “Jack” Yuill (1885-1916) was born in Hendon, London in mid-1885 and died in northern France on 9 July 1916. A former pupil of Manchester Grammar School, Yuill played a handful of games as an amateur for Manchester City and Stockport County before spending the majority of his career in the English amateur leagues. Soon after the outbreak of the First World War, Yuill joined the British Army and was killed in action during the Battle of the Somme.

An employee at print firm Henry Blacklock & Co. Ltd, Yuill played for amateur outfits Northern Nomads and Sale Holmfield before signing amateur terms with Manchester City in March 1906. With opportunities restricted at Hyde Road, Yuill failed to break into City’s first-team and left soon after to join Oldham Athletic. He would subsequently make five appearances for their second string before returned to play for former-club Nomads where he would remain until joining Stockport County in the summer of 1907.

The diminutive winger made his Football League debut in a 1-1 home draw with Bradford City on 26 October 1906, but would struggle to establish himself at Edgeley Park and left in 1908 having made no further appearances. After brief stints at amateur sides Wigan Town and Wrexham, Yuill returned to Manchester City in March 1909 and was handed his debut in a 3-1 loss at Leicester Fosse on 11 March.

Yuill would then score his first goal for the club in a 4-1 triumph over Preston North End two days later, before playing making his third and final appearance for City in a 3-0 reverse at Middlesbrough on 2o March 1909. Soon after, Yuill left Hyde Road and would spend time at Chester, Wrexham and Port Vale, before eventually returning to finish his career captaining Northern Nomads.

Private 11710 Yuill enlisted in the 19th (Service) Battalion of the Manchester Regiment (4th City) on 4 September 1914 and was posted to 1st Platoon, “A” Company. Having undergone initial training at Heaton Park, the battalion moved to Belton Park near Grantham on April 1915 where they joined 90th Brigade, 30th Division. On 7 September, they then moved to Larkhill Camp on Salisbury Plain where Yuill was appointed lance corporal.

On 7 November 1915, the 19th Manchesters left Southampton on the SS Queen Alexandria and set sail for France, landing at Le Havre the next day. They would then go into trenches for the first time near Berles-au-Bois on 9 December, before transferring to 21st Brigade, 30th Division. By June 1916, Yuill had been promoted to corporal and was part of a Lewis machine gun section preparing for the upcoming British offensive north of the River Somme.

On 1 July 1916, the 19th Manchesters were part of 30th Division’s attack on the village of Montauban and by mid-morning had secured all their objectives – including the strongpoint of Glatz Redoubt. Yuill was promoted to the rank of lance sergeant during that day. Relieved two days later, the battalion then spent four days out of the line before moving back into reserve on 7 July to support an attack on Trones Wood and Maltzhorn Farm. After digging into positions in and around Trones Wood the following day, the battalion were subjected to sustained German bombardments until being relieved by men of the 17th Manchesters on 9 July.

The 19th Manchesters had suffered 60 casualties during the action at Trones Wood, including one officer and 12 other ranks killed. Among the dead was L/Sgt Yuill who was 31-years-old at the time of his death. His body was never recovered. On 6 November 1916, Yuill’s father, George, received his son’s financial effects from the Army which totalled £11 4s 9d. He then receiving a further £9 on 25 August 1919. Today, Yuill’s name is among the 72,193 on the Memorial to the Missing of the Somme at Thiepval.

Additional information supplied by Pam and Ken Linge.
A full list of sources used to create this page can be found here.