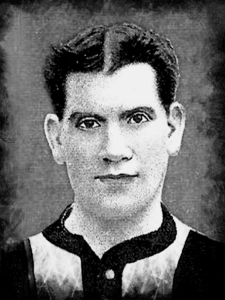 James Comrie (1881-1916) was born in Denny, Stirlingshire on 31 March 1881 and died in Belgium on 9 August 1916. A journeyman footballer, Comrie’s nomadic career epitomises that of the numerous Scottish players who were the backbone of the English game before the First World War. After playing for a number of different clubs in both England and Scotland, Comrie joined the British Army during the war and would subsequently lose his life near the Belgian town of Ypres.

Comrie began his career at the now defunct Third Lanark, who would soon secure a notable 3-1 Scottish Cup Final Replay victory over Rangers in 1905. The following season they reached the final again, but lost 0-1 to Hearts. After making 78 appearances for Third Lanark, scoring 18 goals, Comrie tried his luck south of the border when he joined Southern League side Reading in 1906.

During his stay at Elm Park, the defender made 36 appearances, including a first round FA Cup tie against Bradford City at Valley Parade on 12 January 1907. City won 2-0 in front of 18,000 fans. Comrie gained something of a reputation for missing or turning up late for training, but he was obviously well thought of given the number of appearances he made for the Royals.

In May 1907 Comrie joined Second Division Glossop, where, as club captain, he made 38 appearances, scoring one goal in 1907/08. He played twice against Bradford City that season and obviously caught the eye. On 16 September 1908 City manager Peter O’Rourke and committee member Ike Newton travelled to Glossop to pay a ‘very substantial’ sum for Comrie and William Gould. They made their debuts during a 0-4 defeat at Liverpool on 19 September.

Comrie would initially struggle to gain a foothold in the first team. However, on 19 January 1909 he played when City defeated Workington in the first round of the FA Cup. From then on he was a virtual ever present – making 48 appearances, scoring three goals. He left Valley Parade for Lincoln City on 23 November 1910.The move wasn’t a success. Comrie made only 12 appearances for the Imps, scoring once. He was a part time player and worked as an attendant at Bracebridge Asylum, outside Lincoln.

In the summer of 1911 he left Lincoln, but remained in the area, turning out for Grantham once sometime in either October or November 1911. Comrie subsequently had a brief spell at Stenhousemuir, before returning to his first English club, Reading, where he would play until 1915.

Private 4064 Comrie enlisted in the 1/7th Battalion of the Northumberland Fusiliers, a territorial unit that had crossed the English Channel to France on 20 April 1915 aboard SS Invicta. Almost immediately committed to heavy fighting in the Ypres salient, the battalion suffered heavy casualties. Doubtless, Comrie was one of the reinforcements drafted in to replenish the ranks after the early losses. By August 1916, they were a battle-hardened unit who had spent their entire deployment in the Ypres sector.

On 3 August 1916, the battalion moved from their training base at Dranoutre, south-east of Ypres, to relieve the 1/6th Northumberland Fusiliers in the front line. On the afternoon of 4 August, the Germans opened fire on their positions with light and heavy trench mortars. The following day British artillery retaliated with a bombardment of the German trenches. The enemy replied with trench mortars. That evening the Northumberlands were relieved by the Royal Irish Rifles.

The battalion war diary reported one killed and three wounded during their two-day stint in the front line. They then marched to Neuve Eglise and by the 9 August they were in billets at Meteren. Comrie is listed has having died on 9 August 1916, when the Northumberland’s were out of the line. He could well have been one of the three reported wounded and died as a result of those wounds. Or he may have been the soldier reported killed during the two days in the trenches. Sadly, we will probably never know as Comrie has no known grave. He is therefore commemorated on the Menin Gate at Ypres.

On 26 May 1938 Comrie’ nephew, Malcolm Comrie, signed for Bradford City from York. Although a regular with the reserves, Malcolm couldn’t break into the first team at Valley Parade and left for a position outside football on 6 December 1938.