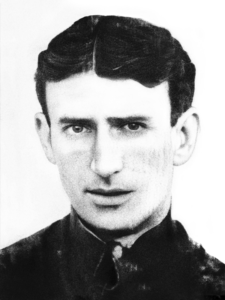 James Conlin (1881-1917) was born in Consett, County Durham on 6 July 1881 and died in Belgium on 23 June 1917. An England international, the often controversial Conlin was a supremely talented footballer who was only the second player at that time to be transferred for over £1,000. The winger retired from the game in 1913 and would ultimately lose his life during the Third Battle of Ypres in 1917.

Conlin began his career in Scotland with the oddly titled Captain Colt’s Rovers. He went onto Cambuslang and Hibernian. He joined Falkirk on 9 January 1900, however it was on 14 March 1901 when his career began in earnest as a left winger with Albion Rovers.

At Rovers, Conlin helped his side win the Scottish Combination Championship in 1901/02 and 1902/03. They reached the Lanarkshire Cup Final on 15 March 1903, but lost 0-3 against Hamilton. Rovers secured a place in the Scottish League Second Division in 1903. In their second League match – at Ayr Parkhouse on 22 August 1903 – Conlin scored four times as Rovers strolled to a 5-2 victory. On 28 November 1903 Rovers again reached a cup final – the Scottish Qualifying Cup – but once again fell at the last hurdle when Arbroath beat them 4-2 in front of 7,000 at Dens Park, Dundee.

Conlin was a fast and tricky winger. Standing at only 5’ 5” and weighing in at 9 st. 11 lbs., his forte was supplying crosses for the centre forwards. However, as has already been noted, he certainly had an eye for goal. Conlin should have signed for Bradford City in April 1904, however, Albion Rovers wanted £200 – an astronomical fee. There was some history between the Scottish club and City’s secretary-manager Robert Campbell. When with Sunderland Campbell had signed Peter Boyle from Rovers for £40, soon after he sold the player to Sheffield United for £170.

City appealed to the Scottish League Committee and they set Conlin’s transfer fee at £60. Albion Rovers responded by alleging that City had approached Conlin without their consent. An international committee, made up of representatives from both sides of the border, met at Carlisle on 23 September. City were found guilty, but the transfer was allowed to proceed. City were fined £50 for their ‘illegal’ approach of the player. However, a £100 transfer fee was approved and Conlin was thus freed to appear in City’s victory over Port Vale at Valley Parade on 24 September 1904.

Conlin became the first City player ever to be sent off when he was dismissed during a 6-1 defeat at West Bromwich Albion on 11 November 1905. On 10 February 1906 he was at the centre of yet another controversy. Promotion chasing Manchester United came to Valley Parade, during the game United’s burly Bob Bonthron repeatedly clashed with Conlin. The crowd – angered by Conlin’s treatment – got completely out of hand. After the game the visiting team were pelted with missiles as they made their way up Holywell Ash Lane. The Football League held a commission of enquiry and duly closed Valley Parade for a fortnight between 1-14 March.

On a happier note, Conlin became City’s first England international on 7 April 1906, when Scotland beat England 2-1 at Glasgow – future City favourite Dickie Bond (then with Preston North End) was on the opposite wing. The attendance of 102,741 was a World Record for an international match. A small party from Bradford travelled to Glasgow to see history being made. Sadly, an injury to left half Harry Makepeace meant that Conlin’s attacking opportunities were limited and he failed to do himself justice. Jimmy had arranged to meet the Bradford party in Glasgow after the game. However, he was spirited away to his native Coatbridge by his enthusiastic local admirers!

In all Conlin made 67 appearances for Bradford City, scoring 10 goals. On 13 July 1906 Manchester City paid £1,000 to secure his services – it was only the second time in the games history that such a transfer fee had been paid. His debut, on 1 September 1906, against Arsenal was bizarre in the extreme. The game was played in a heatwave. Conlin tried to combat the conditions by playing with a knotted hankie around his head! Several Manchester City players retired due to heat exhaustion.

Conlin collapsed in the first half, he gamely returned in the second period, but couldn’t help his new side – at one point reduced to six men – go down 4-1. He helped his club to the Second Division Championship in 1909-10. After 175 appearances and 30 goals he left for Birmingham City on 29 September 1911. His stay at St Andrews was plagued by injury; he made only 23 appearances for the Blues, scoring twice.

On 30 July 1912 Conlin moved on again, this time to Airdrie for a fee of £150. The move wasn’t a success. On 7 October he was fined £2 10s for failing to turn up for a game. A brief triumph followed with the lifting of the Lanarkshire Cup on 30 December 1912, when Airdrie beat Dykehead 5-1. Sadly, Conlin’s off field problems worsened when he failed to turn up for several training sessions. On 4 February 1913, after he admitted having a drink problem, the board fined him again, ordered him to find work and told him to stop drinking. The warning had no effect, on 15 April 1913 Conlin was suspended sine die by the club and placed on the transfer list.

Obviously, the club still rated him as a footballer, as they were asking £200 for his services. Perhaps not surprisingly there were few takers and on 13 August 1913 the Coatbridge Express reported that Conlin had joined Broxburn Athletic, but it was a move that was ‘not the will of the directors’. Presumably the £200 was not forthcoming! Conlin had made 27 appearances for Airdrie, scoring 6 goals. His long and occasionally troubled career ended at Broxburn.

When war broke out in August 1914, Conlin was living at 495 Coatbank Street, Coatbridge with his wife, Elizabeth, and son, David. Enlisting in the 15th (Service) Battalion of the Highland Light Infantry (1st Glasgow), Private 26447 Conlin subsequently began training with his unit, which was often known by its original title of the Glasgow Tramways Battalion. The battalion moved to Prees Heath in Shropshire in May 1915, where it came under the command of 97th Brigade in 32nd Division. After spending time at Wensleydale, the unit moved to Salisbury Plain in August 1915 where it prepare for eventual deployment overseas.

The 15th HLI landed at the French port of Boulogne in November 1915 and would soon experience their first taste of life in the trenches. In 1916, the battalion was involved in heavy fighting during the Battle of the Somme, where they sustained significant casualties. They then saw action during the German retreat to the Hindenburg Line in March and April 1917. The battalion was transferred to the Nieuport sector on the Belgium coast during June 1917 in readiness to support a British offensive at the Third Battle of Ypres. Jimmy Conlin was subsequently killed on 23 June 1917, aged 35. He has no known grave and is commemorated on the Nieuport memorial.

Reproduced with kind permission from David Pendleton and  the Bradford City FC Museum.