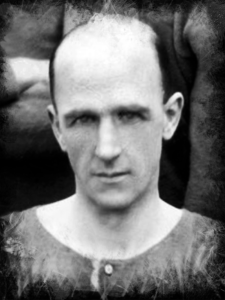 James Anderson Croal (1885-1939) was born in Glasgow on 27 July 1885 and died in Yeovil, Somerset on 16 September 1939. A Scottish international inside-forward, Croal played more than 250 games during a football career that spanned almost two decades. His most productive spell came at Chelsea where he scored 26 goals in 130 games. During the First World War, Croal served overseas in the British Army before returning to Stamford Bridge to resume his career following the Armistice.  Croal also worked as a schoolteacher and died in 1939 aged just 54.

Jimmy Croal began his football career at Falkirk Juniors before moving to Glasgow Rangers in 1905. Despite making his senior debut soon after his arrival, Croal would find further opportunities difficult to come by and was allowed to leave for a brief loan spell at Ayr Parkhouse soon after just two more games. Croal would then return to Ibrox at the end of the 1905/06 campaign, but spent the majority of the next five seasons playing reserve team football and working as a schoolteacher.

Following brief loan spells at Alloa Athletic and Dunfermline Athletic, Croal finally left Rangers for good mid-way through the 1910/11 season, when he joined Falkirk for a reported fee of £10. Drafted straight into the first team at Brockville Park, Croal would go on to make 97 appearances over the next four seasons and played a starring role in Falkirk’s 1913 Scottish Cup triumph. He would also win three international caps for his country and represent the Scottish League on five occasions.

In the summer of 1914, Croal joined English first division side Chelsea for and was handed his senior debut in a 1-1 draw at Tottenham Hotspur on 5 September 1914. He would then go on to play a total of 27 league and six cup games during the 1914/15 season and was part of the Chelsea team that were beaten 3-0 by Sheffield United in the FA Cup Final at Old Trafford.

During the First World War, Croal played a number of wartime games for Chelsea but saw a proposed guest appearance for former club Falkirk on New Year’s Day 1916 fall through, after it was ruled the registration did not meet the criteria set by the Football League and Scottish Football League.

After military service, Croal did eventually return to former club Falkirk on loan in February 1919, before finally resuming his Chelsea career ahead of the 1919/20 campaign. Over the next three seasons, Croal played 76 league and 11 FA Cup games, scoring a total of 19 goals. He then left Stamford Bridge mid-way through the 1921/22 campaign and joined Fulham following a brief loan spell at Dunfermline. Croal would subsequently play 36 games in three years at Craven Cottage, before finally calling time on his professional career at the end of the 1922/23 season. He then worked as a schoolteacher and was living near Yeovil, Somerset when he died prematurely in 1939 aged just 54.

Private R33246 Croal joined the British Army in the summer of 1916 and was subsequently posted to the 11th (Service) Battalion of the King’s Royal Rifle Corps, one of Kitchener’s new army units that had been raised in Winchester in September 1914. Part of 59th Brigade in 20th (Light) Division, the battalion  had been on the Western Front since July 1915 and were involved in heavy fighting at Delville Wood, Guillemont, Flers, Morval and the Le Transloy Ridge during the Battle of the Somme in 1916. The following year saw the take part in the advance to the Hindenburg Line before they moved north to the Ypres Salient.

During the Third Battle of Ypres, the battalion took part in subsidiary battles at Langemark and Polygon Wood. They were then involved in the Battle of Cambrai in November 1917. However, by March 1918 the Falkirk Herald reported that the now-Corporal Croal was in Britain undertaking a course of instruction.

Croal is known to have played a number of wartime games for Chelsea during 1917, however, the London County Council Record of Service 1914-18 states that he served 11 months overseas during the First World War. Full details of Cpl Croal’s service are currently unclear, however, by the time he was demobilised in 1919, he was an acting sergeant.