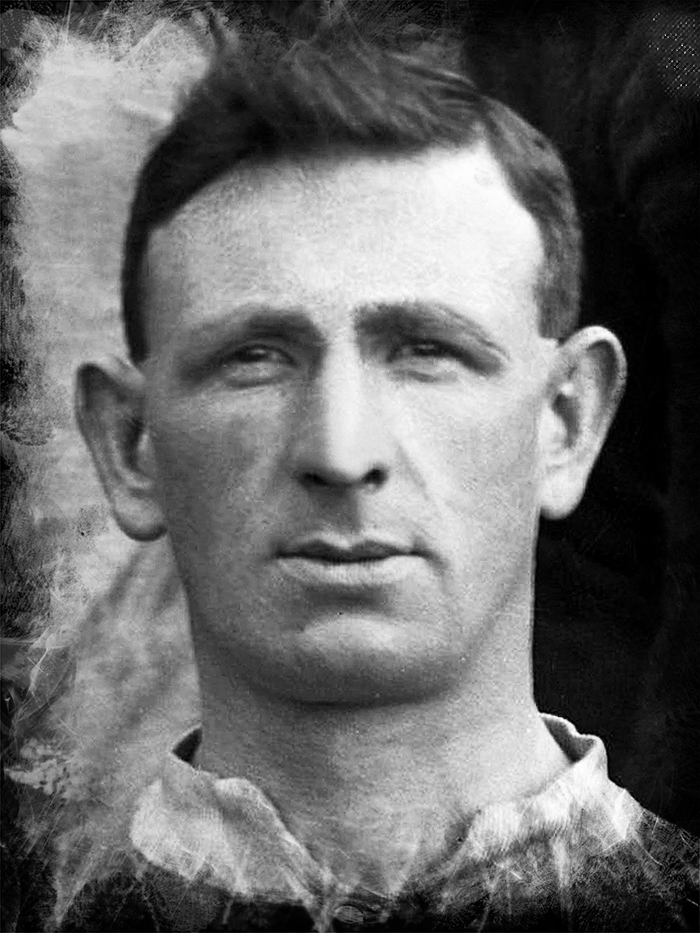 James Hodge (1891-1970) was born in the Scottish town of Stenhousemuir on 5 July 1891 and died in Manchester on 2 September 1970. A talented full-back, who could also play in a number of other positions, Hodge played almost 180 games for four clubs either side of the First World War, during which he served in the British Army. The Scot also had a younger brother and brother-in-law who were professional footballers.

Hodge began his football career at hometown club Stenhousemuir before signing for Manchester United in 1910. The teenager had to wait until 17 April 1911 to make his debut, a 0-0 draw at the Wednesday, and would only make one further appearance during United’s title-winning season of 1910/11.

The following campaign saw Hodge make some inroads into Ernest Mangnall’s starting XI, helped no doubt by the fact that he was also comfortable playing in the forward line and even in goal. Despite his versatility, Hodge was used largely as cover for injured teammates and managed a total of just 10 games as United finished in a disappointing 13th place.

In the 1912/13 season, Hodge found playing time easier to come by and played 19 league and five FA Cup games under new boss John Bentley, helping United to a respectable fourth-placed finish. His fourth season in England was the most productive of his United career and he was used 29 times by his manager in both competitions. For United, the season again proved disappointing as Bentley’s side slumped to 14th in the First Division and were knocked out of the FA Cup at the first hurdle.

The 1914/15 season, the last until official competition was resumed after the First World War, saw Hodge make just four appearances and he would soon leave the club to enlist in the British Army – although he did manage to play a number of wartime games. Following the Armistice, Hodge returned to Old Trafford and played 16 league games, scoring twice, in the 1919/20 campaign.

In the summer of 1920, Hodge finally ended his United career after playing more than 80 games in six seasons at the club. Heading to the English capital, Hodge subsequently signed for Third Division South side, Millwall, who paid a fee of £1,500 to secure the services of the full-back. After just one season at The Den, Hodge moved to Norwich City and would go on to play 55 games in two seasons in East Anglia. Hodge made one final move in the summer of 1923, this time to Southend United, before calling time on his professional playing career at the end of the 1923/24 season.

Gunner Hodge joined the Royal Garrison Artillery in mid-1915 and was subsequently sent for basic training. On 28 September 1915, Hodge played in a charity match between South Bank and Darlington, held to raise money to purchase footballs for the troops at the front, before he was posted to Weymouth in late 1915. On 1 January 1916, the Burnley Express published news of a letter sent by Burnley player, Hugh Shaw, in which he revealed that he has played a number of regimental matches with Hodge. By the summer of 1916, the Newcastle Journal reported that Hodge was now on garrison duty in India with his unit – having travelled via Egypt.

On 17 October 1917, the Manchester Evening News detailed another letter that had been sent by Hodge to the Manchester United manager, Jack Robson, advising that he was now on active service in Mesopotamia and had recently come across his brother, Jack, who had also turned out for United during the 1913/14 and 1914/15 seasons. Hodge eventually left Mesopotamia via Egypt in the summer of 1918, where he met former United teammate George Livingstone at the city of Kantara, situated next to the Suez Canal. On 28 August, Hodge finally arrived back in England and saw out the remainder of the war on home service.