JIMMY SPEIRS - HERO OF THE FOOTBALL AND BATTLEFIELD 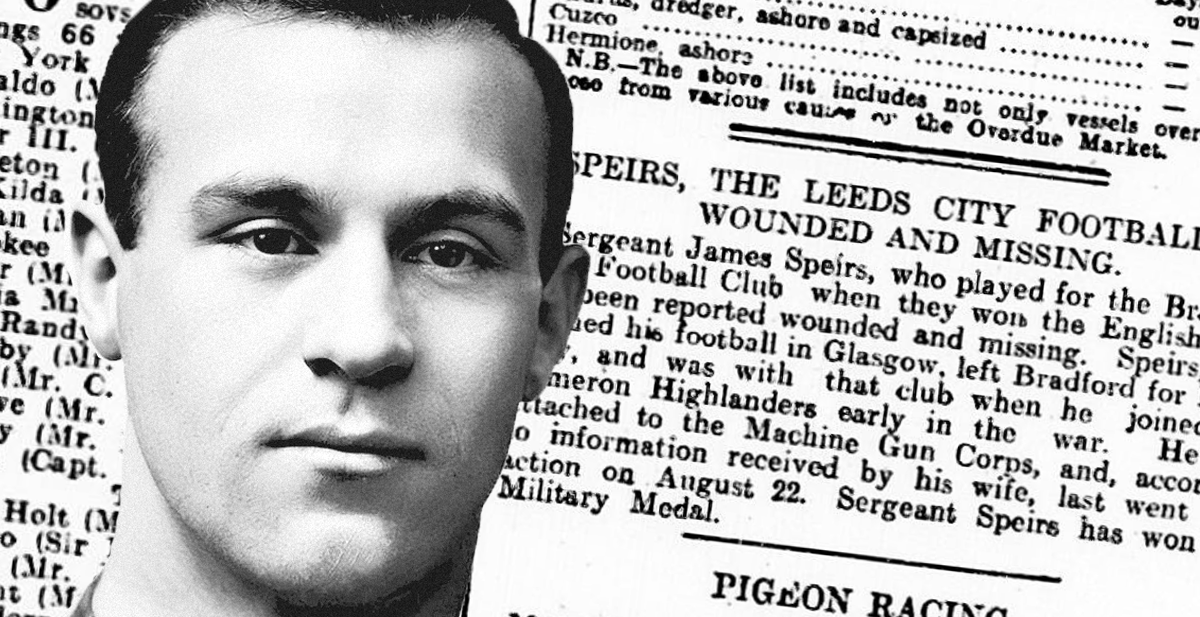 In the ‘Official History of the Great War’, Brigadier-General J. E. Edmonds records that 244,897 British and Commonwealth soldiers became casualties during the Third Battle of Ypres. Among the dead was an FA Cup winning captain who played more than three hundred games as professional footballer before earning honour on the battlefield. His name was Jimmy Speirs.

Born in the Glasgow district of Govan on 22 March 1886, Speirs was to become a renowned inside-forward who scored more than one hundred goals during a ten-year career in Scottish and English professional football and captained Bradford City to their sole FA Cup triumph in 1911. He would then win the Military Medal during the First World War before ultimately losing his life three weeks into the battle that would later become simply known as Passchendaele.

James Hamilton Speirs began his football career at hugely-successful local amateur side Maryhill FC,  where his impressive performances soon caught the attention of Scottish giants Glasgow Rangers. After completing the 1904/05 season with Maryhill, Speirs moved to Ibrox with teammate John McFie in the summer of 1905 and would make his debut on 25 September 1905 in a 5-0 defeat against Heart of Midlothian.

Despite the disappointing start to life at Rangers, Speirs soon settled into the first-team and would go on to score nine times in 21 games by the end his debut season at the club. Furthermore, Speirs would also win his first piece of silverware as Rangers beat Queens Park 3-2 in the final of the Glasgow Merchants’ Charity Cup. The following season was to prove even more productive for Speirs, if not for Rangers, as he struck what would prove to be a career-best 13 goals in 22 league games for the club. Despite this impressive contribution from Speirs however, Rangers could only manage a disappointing third-place finish, languishing some 10 points behind champions, and arch rivals, Celtic.

The 1907/08 campaign would prove similarly underwhelming for Rangers as they again finished two places behind Celtic, who finished as champions of Scotland for the fourth successive season. For Speirs, the season would also represent his last at Ibrox and in the summer of 1908, he moved across Glasgow to join Clyde, then based in Rutherglen. Speirs made his debut in a 1-0 victory over Hamilton Academical on 15 August 1908, and would go on to hit score a respectable 10 goals in 20 league and cup games. For Clyde, Speirs’ debut season proved to be arguably the most successful in the club’s entire history as they finished third, just three points behind champions, Rangers. The club also performed well in the cup, progressing to the semi-final before eventually losing out to Celtic.

After just one season at Shawfield Park, Speirs was persuaded to quit Scottish football and made his way south to join English First Division side Bradford City. The Bantams had only just avoided relegation during the 1908/09 season and were again expected to be among the strugglers during the 1909/10 campaign. Speirs made his debut in a 1-0 defeat at Manchester United on 1 September 1909, before playing his first home game at three days later in a 4-1 victory over Bristol City. Despite having to wait 16 games to score his first goal for his new club, Speirs made an immediate impact at Valley Parade and would be an ever-present as City finished seventh in the league and reached the second round of the FA Cup.

The following season saw City secure a highly-respectable fifth-placed finish, with Speirs contributing seven goals from 25 games played. It was an impressive campaign from the Yorkshire side, further enhanced when they beat Newcastle United 1-0 in the the FA Cup Final Replay at Old Trafford to win the illustrious competition for the first and only time in their history. For Speirs, the triumph was yet more memorable as he not only captained the side, but also scored the goal that won the game. It was the pinnacle of Speirs playing career and City were greeted by more than 100,000 fans on their return to Bradford with the trophy after the final.

After the highs of the 1910/11 campaign, the following season proved to be one of frustration for both Speirs and his club. After starting the season well, the City skipper picked up an injury in late September and was be forced to sit on the sidelines until mid-March 1912. In his absence, City struggled with consistency and would eventually finish mid-table in the First Division. In the FA Cup, they beat neighbours Bradford Park Avenue in the third round but were eliminated in the quarter-final by eventual winners, Barnsley.

Despite his injury problems, Speirs began the 1912/13 season well. Having played 13 of his side’s opening 15 games, the Scot struck nine times and was back in top form. In December 1912, however, Speirs ended his three and a half season stay at Bradford City when ambitious Second Division side Leeds City paid £1400 to take him to Elland Road. It was something of a coup for Leeds, by now coached by Herbert Chapman, and was one which they hoped would see them break into the top tier of English football.

In his first season at Leeds, Speirs scored ten goals in 20 games to help them to sixth spot. It was a solid start but one which Leeds and Speirs bettered the following season as they finished fourth, five points behind champions, Notts County. Captaining the side, Speirs scored 12 goals in 29 games and formed a potent partnership with the club’s top-scorer, Billy McLeod, who hit 27.

Heading into the 1914/15 season, which was to be played against the backdrop of World War One, many believed Leeds were good enough to finally secure a place at the top table of English football and confidence was high at the club. Yet Leeds began the season in the worse possible manner, losing their opening four games of the season, and would eventually finish in a lowly 15th spot. It was a disappointing campaign for the club and one which was compounded by a poor showing in the FA Cup. For Speirs, it would also prove to be his last season in English football.

Having played his final game for Leeds in a 2-0 home loss to Barnsley on 24 April 1915, Speirs made the decision to return home to Glasgow to enlist in the British Army. In his ten-year career as a professional footballer, Speirs had played a total of 256 games in all competitions and had scored 104 goals. He had also picked up an FA Cup winners’ medal and had been capped once by his country.

Jimmy Speirs arrived back in Glasgow soon after the culmination of the 1914/15 football season and enlisted in the Queen’s Own Cameron Highlanders on 17 May 1915. Posted to the 3rd (Reserve) Battalion at Invergordon for training one week later, Private S/18170 Speirs soon impressed sufficiently to be appointed lance corporal on 29 July 1915.

On 29 March 1916, Speirs was posted to the 7th (Service) Battalion of the Cameron Highlanders, who had been in France as part of the 15th (Scottish) Division since July 1915, and was subsequently promoted to the rank of full corporal on 19 July 1916 – three weeks into the major British offensive north of the River Somme. As part of a machine-gun squad, Speirs was to be involved in heavy fighting on the Somme and was wounded in his left elbow on 8 September 1916. After treatment behind the lines, Speirs made a swift return to his unit and again saw heavy action during the Battle of Arras in the Spring of 1917.

The 7th Camerons would suffer heavy losses during the offensive and were finally sent back into reserve to regroup and recover. It was during this period that Speirs was to be recommended for the Military Medal, awarded to other ranks for “Bravery in the Field”. The award was subsequently granted and notification was posted in the Supplement to The London Gazette on 9 July 1917.

Having come through his first two years of service relatively unscathed, Speirs was appointed acting sergeant on 1 June 1917 before being promoted to full sergeant. Soon after, Speirs was granted home leave and would spend time in Glasgow, Leeds and Bradford before returning to his unit during the second week of July 1917.  Two weeks later, the British Army launched a major offensive around the Ypres Salient in Belgium.

On 20 August 1917, the 7th Camerons moved into lines east of St Julien, where they prepared for an attack on a German strongpoint at Hill 35.  Leaving their trenches at Pommern Redoubt, the battalion made progress but were soon held up by heavy machine gun fire coming from Gallipoli Farm and Iberian Farm. After suffering heavy losses, the were relieved on 24 August 1917 and made their way to Erie Camp, south-east of Poperinghe.

Of the 15 officers and 450 other ranks that had gone into action, the Camerons had suffered a total of 144 casualties. Among the missing was Sgt Speirs, who was reported to have been hit in the thigh during the attack. Despite initial hopes that the popular NCO had been taken prisoner, no further information was received and Speirs was eventually reported missing presumed dead.

The 7th Battalion of the Queen’s Own Cameron Highlanders would see further action in the First World War, until 600 of its men were transferred to the 6th (Service) Battalion on 10 June 1918 and it was reduced to cadre. In August 1918, the was disbanded as part of the British Army’s major restructuring.

In October 1919 Speirs’s wife, Bessie, received news that her husband’s body had been found on the battlefield where he had fallen, close to Iberian Farm. On 20 August 1920, she received further communication from the War Office advising her that her husband was now officially recorded as being “Killed in Action or Died of Wounds on or shortly after 20 August 1917.’  Finally, on 6 October 1921, Bessie Speirs was informed that her husband’s remains had been buried at Dochy Farm Cemetery, located north-west of Zonnebeke. It had been more than four years since his death and two since his body had been found on the battlefield.

In one final and sad twist of fate, Jimmy Speirs was to lie under a mis-spelled headstone for almost eight decades following a clerical error on his enlistment in 1915. It was not until 2007 that the Commonwealth War Graves Commission finally agreed to remove the stone recording his name as Spiers and replaced it with one that carried the correct spelling. 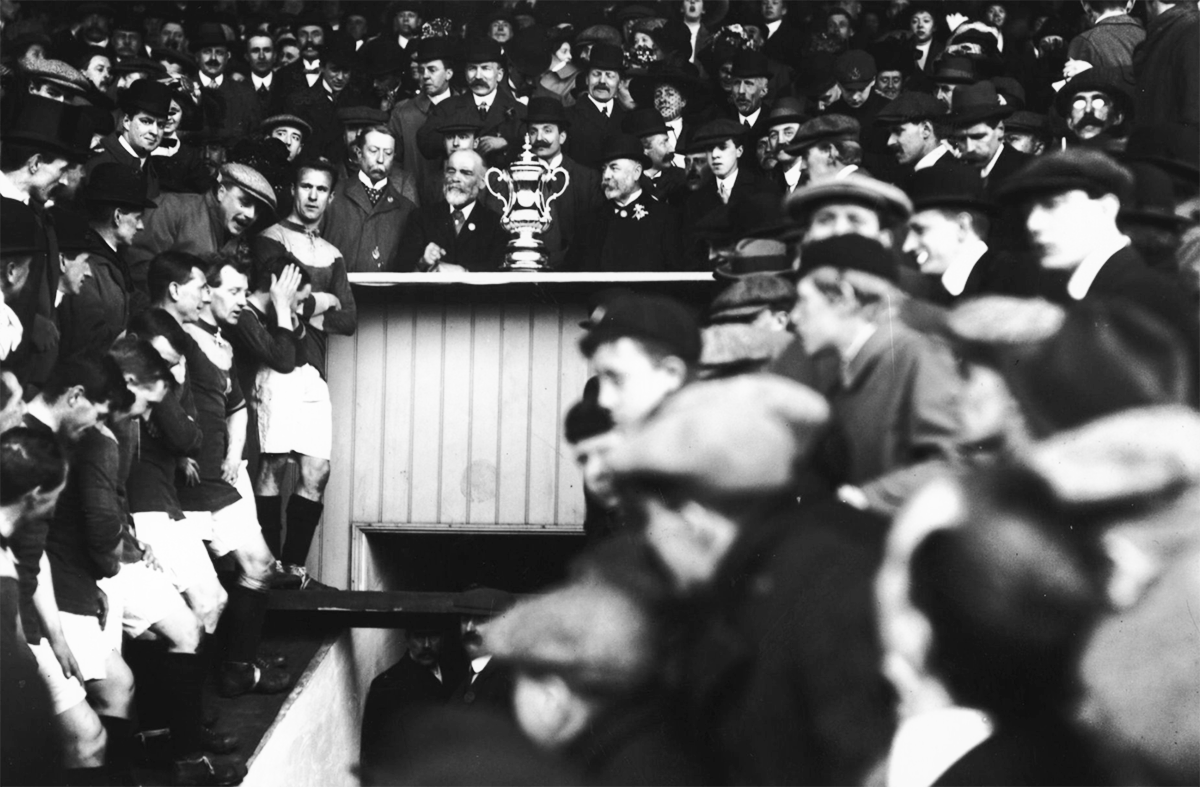