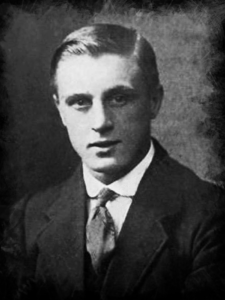 James Stephenson (1895-1958) was born in New Delaval, County Durham on 10 February 1895 and died in Newcastle-under-Lyme, Staffordshire on 1 February 1958. Small but hard-working, Stephenson played more than 280 games during a long career that saw him turn out for four clubs in the Football League. During the First World War, Stephenson served in the British Army and was the younger brother of Villa and Huddersfield Town inside-forward Clem Stephenson.

The inside-forward began his career at New Delaval Villa before joining brother Clem at Aston Villa in May 1913. After making his debut in a 0-0 draw at Everton on 26 September 1914, Stephenson would make a further ten appearances during the 1914/15 season, scoring two goals.

During the First World War, Stephenson would play as a wartime guest for Leeds City where he linked up with Clem and younger brother, George, to help the Yorkshire side to the Midland Section Championship. He would also serve in the British Army. Following the Armistice, Stephenson returned to Villa Park and would play 21 more games, scoring on three occasions. Disappointingly, however, he was not part of the team that beat Huddersfield Town in the 1920 FA Cup Final.

In 1922, Sunderland paid £3000 to secure Stephenson’s services and he would subsequently spend one season in the north-east before moving to Watford in the summer of 1922. In five productive years at Cassio Road, Stephenson made a total of 195 appearances before eventually leaving to join Queens Park Rangers in 1927. He then had short spells at Boston, New Delaval and Newashton before finally retiring from the game in the thirties. He died on 1 February 1958.

Gunner Stephenson enlisted in the Royal Field Artillery (RFA) in May 1917 and was posted to France following completion of his training in Britain. Gnr Stephenson would subsequently take part in several actions on the Western Front and later served with the Army of Occupation on the Rhine .