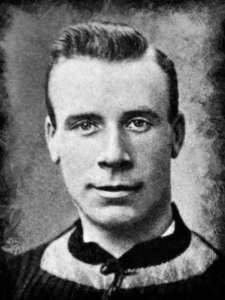 Joseph William Bache (1880–1960) was born in Stourbridge on 8 February 1880 and died in Birmingham on 10 November 1960. An England international inside-forward, Bache spent the majority of his career at Aston Villa before the First World War, during which he served in the British Army.

Bache began his career at Bewdley Victoria before spending time at Stourbridge. In 1899, he joined Aston Villa and would soon form a prolific partnership with Harry Hampton.  Bache was part of the Villa side that won the 1905 and 1913 FA Cups and scored 22 goals in 35 games during the First Division title triumph of 1909/10. Capped seven times by England, Bache briefly joined Mid Rhonda following the First World War before finally moving to Grimsby Town in 1920, where he scored once in five games. He then spent the 1920/21 season as player-coach at Blundell Park before working in Germany with Mannheim and Rot-Weiss Essen. Bache returned to Villa in 1927 for a short spell as reserve team coach.

Bache attested under Lord Derby’s Group Scheme in 1915 and chose to defer his service. Having been transferred to Section B Army Reserve, he was eventually called into the Royal Garrison Artillery (RGA) in July 1916 and posted to the RGA Depot in Plymouth. On 2 September 1916, Bache scored for the Depot in a 2-0 victory over soldiers from Fort Staddon, Plymouth. The other goal was scored by former Birmingham and Coventry City player, Charlie Tickle.

In March 1918, Bache took part in a match between an RGA side and a team of convalescing soldiers played at Home Park, Plymouth. The match was watched by 4,000 spectators and was won by the RGA. Six months later, Bache was part of a British Army team that beat its Belgian counterparts 3-0 in front of 5,000 people at Villa Park, Birmingham. His subsequent service record is unknown, however, he would finish the war having been promoted to the rank of lance bomardier.