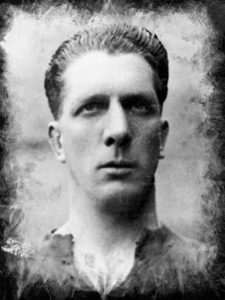 Joseph Arthur Harold Dorsett (1888-1951) was born in Brownhills, West Midlands on 19 April 1888 and died in Eccles, Greater Manchester on 15 March 1951. A nimble winger, Dorsett played more than 250 games for four Football League clubs either side of the First World War, during which he served overseas with the British Army. Dorsett came from a family of fine footballers, which included brother George, who played with him at Manchester City, and nephews Dickie Dorsett and Ted Sagar.

Signed by West Bromwich Albion in 1904, Dorsett made his league debut in a 2-1 home win over Leeds City on 24 October 1908 and would go on to play a further 17 games in two seasons at The Hawthorns, scoring three goals.

In May 1910, Dorsett left the Baggies to link up with older brother George at Manchester City. Handed his debut in a 1-1 draw at Preston North End on 3 September 1910, Dorsett would soon establish himself as a first-team regular at Hyde Road and had made made 19 appearances, scoring once, by the end of his first season at the club. Over the next four years, he would play 103 league and cup games and score 14 goals. He would also represent an England XI in 1914.

During the First World War, Dorsett joined the British Army but would also play seven wartime games for City, scoring on three occasions. On 2 November 1916, he featured in a fundraising match played between sides from Lancashire and Yorkshire held at Hyde Road.

Following the armistice, Dorsett returned to the north-west and turned our for Lancashire amateur side Colne before playing eight further games for Manchester City during the 1919/20 campaign. With opportunities limited at Hyde Road, Dorsett left City in 1920 and signed for Third Division South side, Southend United. In one season at Roots Hall, Dorsett would score five goals in 37 appearances. He would then play 55 league and six FA Cup games for Millwall, before eventually calling time on his playing career in 1923.

Driver 182181 Dorsett joined the Corps of Royal Engineers (RE) in 1916 and underwent training in Bedfordshire. He was then posted overseas and subsequently served in a Signals Company RE attached to Fourth Army.  During his time on active service in France and Flanders, Dorsett continued to play football and was a member of the Fourth Army Signals team. He subsequently returned to professional football following demobilisation from the army.

Additional information provided by Graham Birch.
A full list of sources used to create this page can be found here.